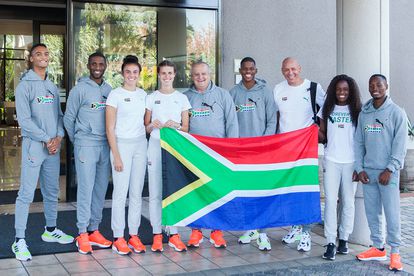 The future is bright for South Africa’s relay squads. So bright it might even be coloured in gold, silver and bronze. Photo: Karen Viljoen

The future is bright for South Africa’s relay squads. So bright it might even be coloured in gold, silver and bronze. Photo: Karen Viljoen

The future is bright for South Africa’s relay squads. So bright it might even be coloured in gold, silver and bronze.

There was great excitement when Akani Simbine dipped at the line to help win the gold medal for South Africa in the 4x100m final at the World Relay Championships in Poland at the weekend and Team SA’s relay manager Danie Cornelius reckons there is more to come.

‘This is without the most professional group of athletes I have ever had the privilege to work with. From day one, we were one team with one goal. That is to be the best we can, to win a medal and qualify for the Tokyo Olympic Games. It is mission accomplished,’ said Cornelius,.

‘What excited me was the camaraderie. Emile Erasmus was only a reserve for the men’s 4x100m relay team. He did not get to run, but on Sunday, the moment Akani Simbine sprinted across the finish line to secure the gold medal, he was ecstatic. His team had won. It was all that mattered.

‘Our performance in the 4x100m relay was far from faultless. Mistakes were made, and still, we won. Just imagine what can happen the day the team executes the perfect race. Nobody is going to beat South Africa even if they got athletes, the likes of Usain Bolt in their team.’

Cornelius could not resist joking that Sunday was the first time a university team won gold at a World Relay Championship. All five of the 4x100m-relay athletes are based at Tuks, as is Paul Gorries, the national relay coach.

Cornelius continued saying that at first, the 4x400m team’s only goal was to qualify for the Tokyo Olympics.

‘But they surprised everyone truly stepping up. It could be reasoned that it is sad that the 4x400m team missed out on not medalling. The reality is that a year ago, we would have been happy with a fifth-place finish in a world championship final.

‘What changed is the attitude of our athletes. They believed they were good enough, and they went for it. That is the type of athletes you want running for South Africa-athletes who are not scared to put their bodies on the line.’

According to Cornelius, it is Gorries who making the difference.

‘Paul has got away to get athletes to believe nothing is impossible and that it should always be what is best for the team. Aleck Skhosana (ASA president) also deserves credit. He initiated the partnership between TuksSport and ASA to help national teams prepare for major championships. It makes sense as most of South Africa’s top sprinters are at Tuks. It is easier to have regular camps working on the small things that end up making a difference between winning and losing.’