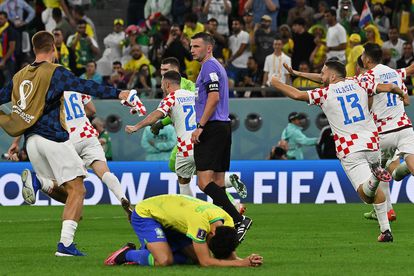 Croatia players celebrate past Brazil’s defender Marquinhos as they win on a penalty shoot-out. Photo: AFP

Croatia players celebrate past Brazil’s defender Marquinhos as they win on a penalty shoot-out. Photo: AFP

Brazil were knocked out of the FIFA World Cup at the quarter-final stage for the second successive tournament after a defeat on penalties to Croatia on Friday evening.

It was a barely believable end result as the World Cup in Qatar once again dished up some serious surprises after a group stage filled with thrills and shock results.

Brazil were heavy favourites against Croatia, but with the scores level at 0-0 after 90 minutes, the game headed into the lottery of extra-time.

However, it then seemed that Neymar had secured Brazil’s progression as the superstar striker produced a piece of individual brilliance to break the deadlock.

Drama ensued from there, though, as Croatia scored an equaliser on the counter-attack with their first shot on target.

When it came to the penalties, Croatia were in control from the start to the finish, ultimately sending Brazil crashing out of the tournament.

Croatia will face the winners of the Netherlands vs Argentina encounter that will take place in the later game on Friday.

Check out some of the reaction to the Brazil-Croatia result below: