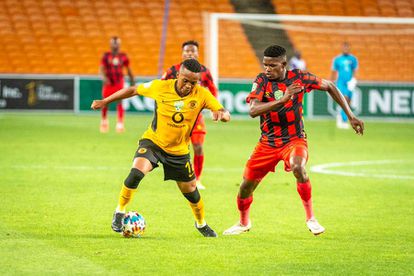 Chiefs were left to lament missed chances when an awful back pass was snapped up by Augustine Kwen who provided a powerful finish to score the decisive goal in this fiercely-contested battle.

Amakhosi looked to have levelled matters in the dying minutes as Leonardo Castro bundled the ball over the line, but the goal was ruled out for an offside in the build-up.

“Mr. Baxter had a lot of success in his life,” he said when asked by iDiski Times.

“So it’s a lot of respect from my side. I’m new in this business, I’m happy about it. I worked hard on myself.

“Yes, I played with one of the best, yes I a lot of coaches who were among the best in the world, so I saw a lot of quality things.

“But again, you have to also as a coach to improve and work hard on yourself day-by-day and if I get 1% of the success Baxter had, I would be happy.”

This defeat will hurt for Chiefs fans

Coming into this encounter, Chiefs coach Stuart Baxter had said they weren’t out for revenge, but this result will be incredibly painful for the Chiefs team.

“I do not think we are the huge favourites,” Baxter said prior to this clash. “We have to make ourselves the favourites. When we had the Nedbank Cup launch, I was asked a hundred times if we have some bad blood revenge in the air, because they have taken our scalp in the 2019 Final. I don’t want that to be the driving force. When the lads are tired and that keeps them going, I will accept that.