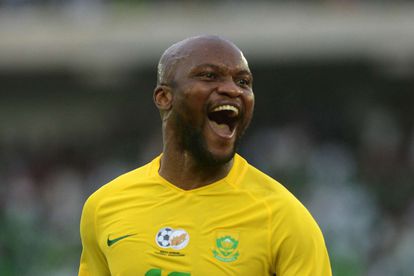 Tokelo Rantie is in search for a new club after his career came to an unceremonious halt, and Mamelodi Sundowns are looking ever more the most likely destination for the player.

The Bafana striker has been out of action for over a year, despite spending the first half of the 2018/19 season as a Cape Town City player.

This was after returning to South Africa from Turkey, where he went AWOL from former club Gençlerbirligi, and subsequently had his contract torn up.

The former Bournemouth forward’s bid to pick his career back up again looked promising when he linked up with the Citizens, but he could only manage an appearance on the bench as the club cut ties with him without kicking a ball in anger.

He has since resurfaced at the nine-time PSL champions base in Chloorkop, in search of another opportunity to prove he can perform at the highest level.

A bit of promising news for Rantie is that he seems to have a fan in the person who matters the most, Sundowns coach Pitso Mosimane, who has stopped short of guaranteeing the player a contract.

The 55-year-old’s interest in the player is understandable, as the Tshwane giants have recently lost two proven goal-scorers in Percy Tau and Khama Billiat, and the void left by the duo was evident in the previous campaign, despite their successful title defence.

Mosimane has cautioned Rantie to be patient, but made no secret of his desire to bring him on board.

“To crack it [at Sundowns] is not easy and I hope he is patient. If he is looking at the transfer of August 31 that he should have a contract,” Mosimane said.

“Maybe we have not made a decision because he must also understand that he is at one of the highest teams in Africa, so it’s not easy to crack it in there. You really have to score goals for us, training and so on.

Sundowns have so far had a relatively quiet season, only confirming the signing of Uruguayan striker Mauricio Affonso.

The club has also been linked with the likes of Billiat and Free State Stars defender Nyiko Mobbie.