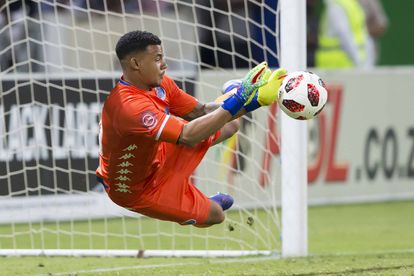 SuperSport United CEO Stan Matthews has confirmed that he will sit down with Ronwen Williams to discuss his future with the club.

Williams has, for years now, been linked with a possible move away from SuperSport United with both Orlando Pirates and Mamelodi Sundowns reported to be keen.

Now, speaking on Power FM, Matthews said Williams has indicated that he’d like a change of environment as he has been with SuperSport United all his life as footballer.

And he doesn’t blame Williams for entertaining the idea of leaving SuperSport United for greener pastures, saying he’s given his all for the club in the PSL.

Nonetheless, Matthews revealed that there hasn’t been any offers on the table for the services of the Bafana Bafana skipper.

WILL WILLIAMS LEAVE SUPERSPORT UNITED FOR SUNDOWNS OR PIRATES?

“I haven’t had my sit down with Ronwen yet, he is in camp at the moment, I did give him a commitment that we will sit down and have a chat. He has told us that he has one eye of maybe looking at a change of environment,” said Matthews.

“One couldn’t blame him. He’s been at the club since he was 12 and achieved everything he could possibly achieve, he’s won trophies, he’s the captain of Bafana Bafana with us and if his football chapter needs to be broadened or taken elsewhere it’s something he has discussed with us. It’s something we’d be supportive of him if the right move comes along.”

“But there’s nothing on the table right now and we haven’t had the discussion with him. I need to catch up with him, the last week’s discussions were about losing Kaitano as a coach, trying desperately to maintain our top-eight spot which went to the last game.”

“So, that type of discussions were all put on hold as agreed with Ronwen until the end of the season. Whatever needs to happen will unfold in the next few weeks,” he said.