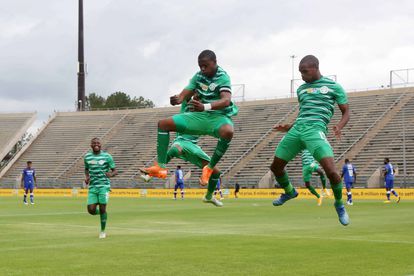 Things ended all level in the first leg of the second MTN 8 semifinal, with the visiting Bloemfontein Celtic holding a slight advantage over Supersport United after a one-all stalemate at Lucas Moripe Stadium.

Phunya Sele Sele clinched a crucial away goal going into the second leg in Bloemfontein.

It came through club stalwart Ndumiso Mabena, who broke away from the defence in the 14th minute to shoot past goalkeeper Ronwen Williams, who was beaten on his left.

United were not short of chances in their search for parity, but would have to wait until the second half for the leveller.

Zambian international Gamphani Lungu was the man who provided the opener, just five minutes after the break.

The 22-year-old needed two bites at the cherry to fire in from close range from a set-piece after the Celtic defence blocked his initial shot.

Chances continued to come in at either end, the best of the lot coming towards the final whistle, with Teboho Mokoena’s long-range shot almost brushing the outside of the upright with Celtic keeper, Sipho Chaine well beaten.

There were to be no further goals as the two teams go into the reverse fixture level on the scorecard, with the hosts enjoying an away-goal advantage.

The second leg will be played at Dr Petrus Molemela Stadium on Sunday, 8 November.

Meanwhile, the other semifinal ended with clear daylight between the two sides going into the crucial second leg, as Orlando Pirates brushed aside rivals Kaizer Chiefs at Orlando Stadium, where they registered a 3-0 win on Saturday.