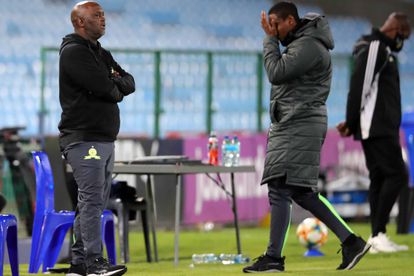 Al Ahly mentor Pitso Mosimane has made his intention to sign former star player Gaston Sirino clear during recent weeks while going as far as saying the Uruguayan is ‘crying’ to leave Mamelodi Sundowns.

Pitso Mosimane is widely regarded as the coach who showed the most amount of faith and belief in Rhulani Mokwena. Despite his age, the young coach was given a front row seat at Mamelodi Sundowns during a trophy laden spell under Pitso.

Rhulani Mokwena however has since questioned the ‘ethics’ of his former mentor for comments made during the pursuit of Gaston Sirino.

“The Gaston Sirino chapter must be closed. Even coach Pitso Mosimane must close the chapter because Sirino is a Mamelodi Sundowns player,” Rhulani Mokwena said as quoted by SunSport.

“He signed a four-year contract. He said to us that he is happy to stay and has committed himself to the club.

“Just like we don’t speak about players from other teams and Pitso Mosimane should know that, I think it is a little bit unethical to continue to have this talk about Gaston. The club has issued a statement on Sirino.”

“Now [Sirino] is 29, going to 30, and I understand how he reacted, to say ‘I have a chance to make a bit more for myself, this might be my last contract’.” Pitso Mosimane said regarding the Gaston Sirino situation.

“Players, coaches and agents have a lot to learn. Sometimes we lose out on opportunities, especially players, we will say ‘this guy is bankrupt, he doesn’t have any money.’

“There are many more years to live after football. Gaston was crying for this chance, I know that for sure.”

Pitso Mosimane and Rhulani may meet soon enough to clear the air with Mamelodi Sundowns and Al Ahly both still in the hunt to qualify for the CAF Champions League knockout phase.

They’ll both first have to make it past the group stages should they wish to test their pedigree against one another.