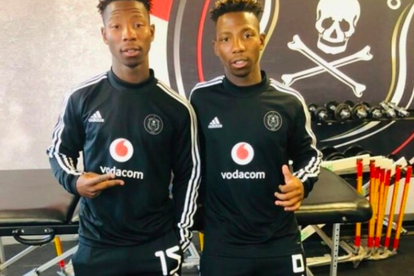 Orlando Pirates have the world seeing double with these identical twins both playing for the Soweto giants. Can you tell the difference? Check this out!

These twins can not be separated. Imagine how defenders feel trying to mark what appears to be the same man in two different parts of the pitch.

To make matters even more confusing, they play two positions that are constantly linked on the field.

Introducing Simiso and Simo, twins straight out of the Buccaneers.

They may look the same but they occupy different positions on the field of play.

Simo is an attacking midfielder while Simiso is an out and out striker. Meaning, the two are often seen linking between one another.

Both players were recently loaned out by the Bucs with neither making it into Pirates senior side as yet. The duo were loaned out to Sekhukhune United and Venda Academy, respectively.

Now, both men are being targeted by Motsepe Foundation Championship side MM Platinum (La Masia), according to FarPost.

Do you think we will see the Bophela twins play for Pirates someday?