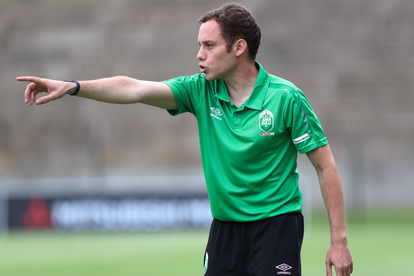 AmaZulu FC head coach Romain Folz believes the KwaZulu-Natal side will not be underdogs in the MTN8 final against Orlando Pirates.

‘Fohloza’ has a colossal task to upset Ezimnyama Ngenkani who are widely seen as favourites to hoist the MTN8 trophy.

However, the 32-year-old tactician says they know what to expect from the Soweto giants after playing them in the DStv Premiership.

FOLZ NOT SEEING AMAZULU AS UNDERDOGS

“I don’t know if we are underdogs or not, as I told you, it’s gonna be a game between two very good teams, I’ll be very honest saying that what happens on their side in their previous game is their matter not mine,” Folz told the journalists at AmaZulu Media Open Day.

“I’d like to focus on what we have to do, obviously it doesn’t mean we’re not looking at what they are doing.

“We try to analyse how they play, the different variations in their shape that they might have and the style of play they have which we know from the last time we played them and today there’s not too many changes.

“There’s a few tricks here and there they’ve added but I wouldn’t say we’re favourites or underdogs, I think we are here because we deserve to be here and we didn’t steal anyone’s spot.

“It’s gonna be a matter of giving our best like we always do, and as I always say, if we deserve to win that game, we will win it.”

FOHLOZA NOT CONCERNED ABOUT SALENG

In other news, Folz says they won’t have a special plan to contain in-form Monnapule Saleng when they take on Orlando Pirates in the MTN8 final.

AmaZulu knocked Kaizer Chiefs out of the MTN8 to advance to the final while the Buccaneers saw off Mamelodi Sundowns in the semi-finals.

With Saleng having been in sublime form recently, Folz admitted they’re aware of his qualities, but insisted they won’t have a special plan to stop him.

“We treat every team, every player with the same level of attention and I would the same of overall focus,” Folz told the journalists at AmaZulu Media Open Day.

“You’re aware of few individuals within the team but you don’t put your entire game plan and the entire focus in one or two, he’s a good player.

“There are other good players just like we have the players, so as much as we know what they have, I think they know what we have and as I said it’s gonna be a good be match between two good teams.