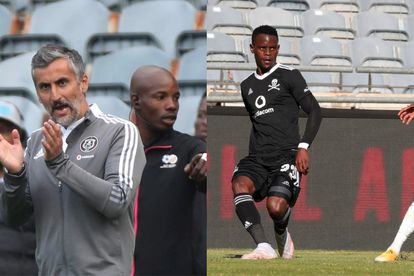 Orlando Pirates face a major test this weekend when they take on defending champions Mamelodi Sundowns in the MTN 8 semi-final first leg.

Here we wrap up all the latest news, views and analyses surrounding Orlando Pirates from across the pages of TheSouthAfrican.com.

Orlando Pirates have kept six clean sheets in all competitions so far this season but the Namibian feels he can get amongst them.

Riveiro has already lauded the professionalism shown by Erasmus in his early training sessions but has suggested that he might not be ready to roll come Saturday’s MTN 8.

Orlando Pirates star Fortune Makaringe says that the past is the past and won’t impact how the Sea Robbers go about their business in the MTN 8 this weekend.

Pirates have lost their last five in all competitions against Sundowns but Makaringe says they aren’t dwelling on that at all.

Pirates set out to snatch the impetus

Orlando Pirates are well aware that the first leg of their MTN 8 semi-final against Mamelodi Sundowns is of immense importance.

Pirates skipper Innocent Maela says that while they can’t win the tie in the first leg they must do everything they can to stay in the hunt for all silverware.

How Kermit Erasmus forced his move back to Mayfair

Kermit Erasmus was the driving force behind his own move back to Pirates according to the latest reports.

The striker did everything he could to get to a place where he hopes he can push for a national team spot.

Orlando Pirates coach Jose Riveiro has broken his silence regarding the return of Ndumiso Mabena to the club.

Mabena was heavily linked with a sensational return to the Soweto giants just before the closing of the PSL transfer window last week.

Former Pirates coach Josef Zinnbauer has opened up on his decision to pick Fadlu Davids as his assistant at Lokomotiv Moscow.

Davids had been without a club since his departure from Pirates at the end of last season, and this was after spending three years with the club.

They managed to bag three signings at the 11th hour.

Orlando Pirates will win something this season

TheSouthAfrican.com’s Craig Lewis has stuck his neck out with a bold prediction.

Pirates will bag some silverware this season he says.

Orlando Pirates have made some exciting signings in the window and fans can’t wait to see them in action.

Want to find out how Twitter feels Pirates should line up.

Kermit Erasmus has returned to Pirates looking to add to his PSL goal tally for the club.

You can find out how he stacks up against club legends.