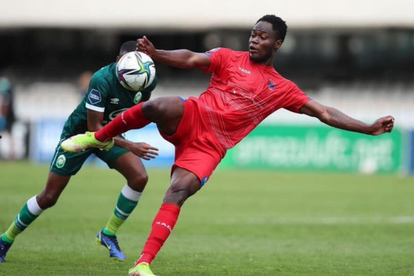 Kaizer Chiefs seem to always have it the worst in deal talks, don’t they? Perhaps it is just the ‘price you pay’ for being such a massive club. The latest example involves Chippa United‘s striker Eva Nga.

As The South African previously reported, Amakhosi were reportedly in the concluding stage to sign Cameroon’s burly striker Nga from the Chilli Boys.

Unfortunately for all concerned, the parties failed to agree on the numbers.

“It has now been widely reported that Eva Nga, who at one point seemed poised to join Kaizer Chiefs, is no longer expected to be at Naturena,” Soccer Laduma reported in their latest issue.

With the Cameroonian’s deal initially ending on 30 June, it is said that the Chilli Boys exercised an option to extend his contract by another year, meaning Amakhosi needed to pay a transfer fee.

“Chiefs were prepared to pay, and it is believed that Amakhosi went as far as tabling a transfer fee of around R2 million to try and get the deal over the line,” the outlet added.

“With the deal seemingly agreed on in principle and Nga, who first arrived in South Africa two years ago to join Gavin Hunt at Bidvest Wits, now firmly in Chiefs’ sights…the deals collapsed because of the player’s personal demands.”

The publication added to suggest that Nga was earning around R1 million a year at the Gqeberha club and was understandably keen to double that figure at Kaizer Chiefs.

This means that the 29-year-old is currently taking home a salary of around R80 000 and wanted to jump to around R160 000 when he becomes a Chiefs player.