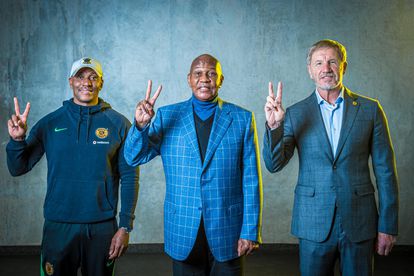 Kaizer Chiefs officially have a new coach – and a familiar one at that in 67-year-old Englishman Stuart Baxter. Photo: Twitter @KaizerChiefs

Kaizer Chiefs officially have a new coach – and a familiar one at that in 67-year-old Englishman Stuart Baxter. Photo: Twitter @KaizerChiefs

Stuart Baxter was reportedly keen on working with midfielder Thabo Cele but the Kaizer Chiefs management was divided on the idea.

According to a report by Soccer Laduma, Baxter was the one who recommended that Cele be recruited after Phathutshedzo Nange’s injury against Royal AM.

However, some members of the management felt Cele wasn’t the right player to join Chiefs at the moment – and that’s how the central midfielder ended up moving to Poland.

And what’s interesting is that Cele was, until recently, a free agent having left Portuguese outfit Cova da Piedade in June.

Now, with Nange injured and Cele not signed, Baxter may well be forced to bring back Kearyn Baccus to partner Cole Alexander.

What took the majority of Amakhosi fans by surprise against Royal AM, is that Baxter replaced the injured Nange with a more defensive. Anthony Akumu when the team was already trailing.

And this despite having more creative players that could have changed the complexion of the game for Chiefs.