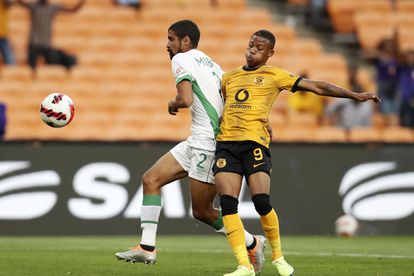 Abbubaker Mobara of AmaZulu challenged by Ashley Du Preez of Kaizer Chiefs during the DStv Premiership 2022/23 match between Kaizer Chiefs and AmaZulu at the FNB Stadium, Johannesburg on the 03 September 2022 Photo: Muzi Ntombela/BackpagePix

Abbubaker Mobara of AmaZulu challenged by Ashley Du Preez of Kaizer Chiefs during the DStv Premiership 2022/23 match between Kaizer Chiefs and AmaZulu at the FNB Stadium, Johannesburg on the 03 September 2022 Photo: Muzi Ntombela/BackpagePix

AmaZulu host Kaizer Chiefs in the second leg of the MTN8 semi-final clash at Moses Mabhida Stadium on Sunday afternoon.

AmaZulu head into this encounter with a slight advantage over Chiefs having scored the all-important away goal in the first leg.

All Romain Folz needs is to ensure that his side plays to a goalless draw to advance to the MTN8 final where they would meet Orlando Pirates.

For Chiefs, a straight win or a 2-2 would be enough to see them book a place in this year’s MTN8 final which would be their first since 2016.

Goalkeeper Itumeleng Khune and striker Bonfils-Caleb Bimenyimana are doubtful for this encounter against AmaZulu due to injuries.

On the hand, Usuthu’s Lehlohonolo Majoro is out following a head injury against Pirates while Tercious Malepe received a red card against Maritzburg United.

This encounter between AmaZulu and Kaizer Chiefs will be screened LIVE on SuperSport PSL channel 202 on the day.

The match will also be available on SABC 1 with a number of their radio stations also scheduled to broadcast the match.

The South African website will run a live blog with a comprehensive match report published immediately after the game.