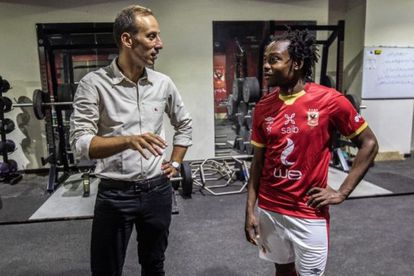 Bafana Bafana vice-captain Percy Tau is set to prepare for life in Egypt now that the international break is over.

Tau has already been to Al Ahly’s base in Cairo where he signed a long-term deal before being unveiled as their player from Brighton & Hove Albion.

Al Ahly folked out around R30 million to lure Tau from Brighton, but he’s not the most expensive player in the history of the Club of the Century.

In fact, his transfer from Brighton, according to KickOff, is ranked fifth – meaning there are four other players who were bought before him for a higher fee.

The most expensive player Al Ahly bought is Hussein El Shahat who joined them from Al Ain, and cost them R73 million.

And that’s R33 million more than what Al Ahly spent on the left-footed South Africa international.

The second most expensive player is Nigerian forward Junior Ajayi whom Al Ahly paid R42 million for from SC Sfaxien in 2016.

Former striker Malick Evouna remains the third most expensive player ever bought by Al Ahly; they paid R38 million for him from Wydad Casablanca in 2015.

Ahead of Tau, at number four, is Aliou Badji who’s currently on loan at Amiens SC from Al Ahly – the Club of the Century paid R33 million to lure him from Austria Vienna.