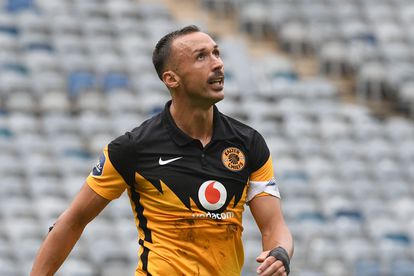 IF reports Serbian striker Samir Nurkovic is on his way out of Naturena are true, then he’s already played his final match for Kaizer Chiefs. Image: Twitter/KaizerChiefsFC

IF reports Serbian striker Samir Nurkovic is on his way out of Naturena are true, then he’s already played his final match for Kaizer Chiefs. Image: Twitter/KaizerChiefsFC

Kaizer Chiefs and Royal AM have confirmed the starting lineups for their Macufe Cup clash on Sunday.

The impressive young star has been rewarded for his recent efforts.

Njabulo Blom’s contract stand-off could be set to break up a relationship between the club and his agent.

Apparently some players don’t get butterflies, they get chillies in the stomach.

FIVE THINGS WE HAVE LEARNED ABOUT YUSUF MAART

Yusuf Maart is shaping up to be a great signing for Kaizer Chiefs.

We have taken a look at his early games to see what we can learn.

The Glamour Boys will take a trip to the Free State province this weekend to participate in the 2022 edition of the Macufe Cup.

Amakhosi will face Royal AM for the first time in this cup event on Sunday, 25 September at the Toyota Stadium in Bloemfontein.

KAIZER CHIEFS STAR EXPLAINS WHY HE THREW UP THE CROSSBONES

The 24-year-old celebrated his goal for Amakhosi by unknowingly saluting the Sea Robbers.