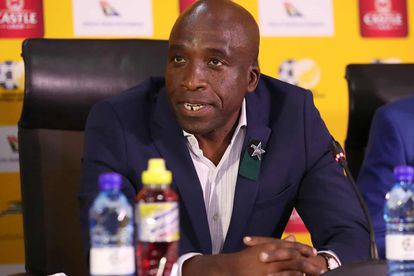 In this file photo, David Notoane, U23 South African soccer team coach, is seen during the 2019 African Cup of Nations and Cosafa Cup South Africa team announcement at Safa House, Johannesburg, on 21 May 2019. Photo: ©Muzi Ntombela/BackpagePix

In this file photo, David Notoane, U23 South African soccer team coach, is seen during the 2019 African Cup of Nations and Cosafa Cup South Africa team announcement at Safa House, Johannesburg, on 21 May 2019. Photo: ©Muzi Ntombela/BackpagePix

SA national Under-23 coach David Notoane will take charge of the senior national team that will do duty in the Caf Total Chan qualifiers, where South Africa will play Lesotho in the second round as they look to book a place in Ethiopia CHAN 2020.

The winner will progress to the third and final round, with the first and second legs taking place on September 20 and 30.

Safa Acting CEO Russell Paul said with the Afcon Under-23 Olympic qualifiers pending, the association had decided to give the team “as much preparation as we can to assist Notoane with his preparations”.

After dispatching Angola in the opening round home and away, Notoane’s next assignment in the Afcon Under-23 qualifiers is against Zimbabwe, in which the overall winners qualify for the finals in Egypt.

“With the upcoming Under-23 qualifier against Zimbabwe in September, we are endeavouring to provide our Olympic squad with as much preparation time as we can, and therefore, we have asked coach David Notoane to assemble a squad for Chan to assist him with his preparations.

“These (Chan) matches will provide the team and the coach with an ideal opportunity to get quality time under their belt,” said Paul.

Notoane was in charge of the Cosafa senior men’s national team that won the Plate after beating Malawi 5-4 on penalties.

Where are the gaps? African digital innovators are turning plastic waste into value

Kaizer Chiefs: Amakhosi legend and TWO stars on their way out of Naturena

Kaizer Chiefs to still wield the axe? The 3 stars that could still leave