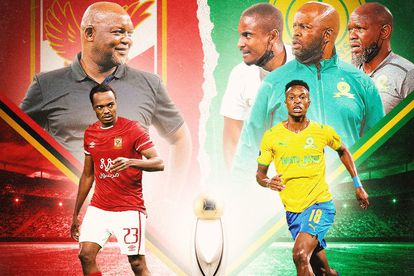 READ | PITSO MOSIMANE AND PERCY TAU’S LEGACY VS THE PSL’S REPUTATION – HISTORY ON THE LINE TOO!

There are mouth-watering match-ups across the park. With class from the goalkeepers to the strikers and even the managers – and a special touch of Mzansi flavour in this one!

It wasn’t easy choosing just three match up’s since both players are filled with internationals from not just SA but the likes of Egypt and several top-tier African nations. So, we started at the top with the men who engineer the mechanics that run these two powerful engines…

Usually, in a two-on-one situation you’d favour the side with two but not when Mosimane is the one.

Mosimane personally mentored Mokwena and Mngqithi at Sundowns. During there CAF Champions League winning season in 2016 and throughout multiple DStv Premiership titles.

He passed down the torch and The Brazilians co-coaches ran with aplomb. They have been on a roll, winning the past two seasons without Mosimane as well as securing the Nedbank Cup and MTN8 trophies. They have dominated South Africa well Mosimane has dominated Egypt.

Mosimane has conquered Africa twice, winning the last two CAF Champions Leagues while also finish third, earning bronze medals in the last two FIFA Club World Cups. Both sets of coaches know what they are up against – on a personal level.

Mokwena and Mngqithi have never beaten Mosimane’s Al Ahly, so there is history on line for them against Jingles.

READ | THE NEXT PERCY TAU DISCOVERED!

Two of the best PSL players and two Sundowns legends will be crucial to their teams attacks.

Goals win matches so either man can be a match-winner with the heat on in Egypt. Tau has missed the last month of action but has spent every moment working to recover for this match – to face the side where he made a name for himself. He is certainly not lacking any motivation while Mshishi knows how important this clash is against his former teammate.

“As a team we are happy, we are on top of the log but we know for sure that the job is not done yet, but so far so good. On Saturday we are playing against Al-Ahly, it’s going to be a fight and as a team we are looking forward to giving it our all,” Zwane said on Sundowns official website.

These players have goals written all over them!

Miquissone is a former Sundowns player too while Shalulile is in need of a goal and there is no better place or time to find it. In a match where one moment of individual brilliance could decide the result, these men are more than capable of such a moment.

Miquissone scored a brace in his last outing in the Egyptian Premier League. So, Masandawana defenders will certainly have their hands full.

Legacies, pride and history are on the line when the CAF Champions take on the PSL Champions in Egypt on Saturday evening.