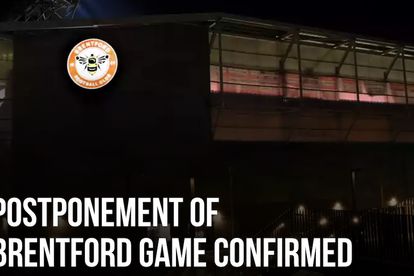 The Premier League match between Brentford and Manchester United has been postponed and will be rescheduled.

The Premier League match between Brentford and Manchester United has been postponed and will be rescheduled.

“A decision was taken to close first-team operations at the Carrington Training Complex for 24 hours to help minimise risk of further infection, and individuals who tested positive are isolating in line with Premier League protocols.

“Given cancellation of training and disruption to the squad, and with the health of players and staff the priority, the club requested the match to be rearranged. The Premier League Board took the decision to postpone based on guidance from medical advisors.”

“Manchester United regrets the inconvenience caused to Brentford FC and to the fans of both clubs by Covid-19.”

Man United the latest club to be hit by Covid disruption

United’s fixture in west London is the second Premier League game to fall to the virus in three days, after Tottenham Hotspur’s match at Brighton on Sunday was also called off.

The Premier League on Monday reported 42 new Covid-19 cases in the past week – a seven-day record since testing figures started being released in May 2020 – up from 12 cases the previous week.

Norwich are due to host Villa on Tuesday, while Tottenham are scheduled to travel to Leicester on Thursday.

The Premier League last week instructed all clubs to reinstate Covid-19 restrictions, including a return to social distancing and mask wearing.

“With the health of players and staff the priority, and in light of the recent rise in Covid-19 cases across the country, the Premier League has reintroduced emergency measures,” the Premier League reiterated in a statement late last Monday.

“These include protocols such as more frequent testing, wearing face coverings while indoors, observing social distancing and limiting treatment time.”

On This Day: What happened on 26 June?