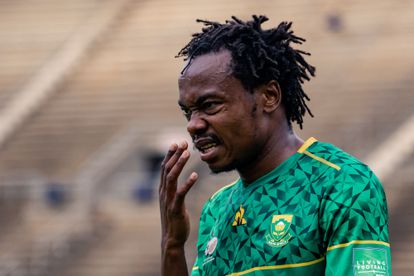 Bafana Bafana starting XI prediction: South Africa got their Fifa World Cup qualifying campaign off to a sluggish start against Zimbabwe but can steal a march on group leaders Ghana on Monday evening.

In the match against Zimbabwe, South Africa were well organised but lacked creativity and execution in the final third.

Centre forward Evidence Makgopa and star man Percy Tau have caught the flak for that performance and while the latter might be safe the former already needs to worry about his place.

Skipper Ronwen Williams will definitely start in goal for South Africa having dealt with the limited threat posed by Zimbabwe. He can expect to have a busier evening against the Black Stars though.

In front of Williams, Hugo Broos is unlikely to try and fix what isn’t broken, with Siyanda Xulu and Rushine de Reuck showing great promise as a centre back pairing.

On the flanks Nyiko Mobbie could be in danger of losing his place in favour of someone that offers a bit more going forward, with in-form Sibusiso Mabiliso in the squad.

The central midfield pairing of Mothobi Mvala and Teboho Mokoena is also a promising combination and could ignite further links between Mokoena and Mamelodi Sundowns.

Bafana Bafana coach Hugo Broos will need to establish a better link between the midfield and the attack to supply their goal threats with the kind of ball they need. We should see Bongokuhle Hlongwane get a chance from the start ahead of Gift Links.

Broos has made it clear that he doesn’t expect Tau to be at his absolute best given his lack of football, but he should still start ahead of the likes of Sipho Mbule.

A lack of attacking alternatives is likely to see Makgopa lead the line again, however Luther Singh is likely to be replaced by Victor Letsoala on the left.

Orlando Pirates have the belief they can shock Sundowns