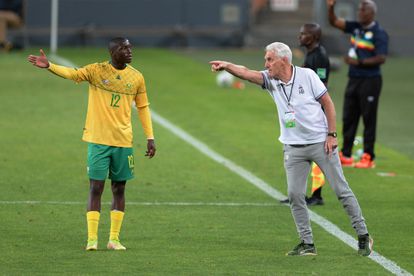 Bafana Bafana take on neighbours Zimbabwe in yet another crucial 2022 Qatar World Cup Qualifier for the hosts.

It may be a dead rubber for Zimbabwe, but Bafana Bafana know that they can ill afford a slip up against their neighbours with Ghana close behind them.

Bafana Bafana currently occupy top spot in Group G of the World Cup qualifiers with 10 points. Ghana currently occupy second spot with nine points, and are the only other team who have a realistic chance of qualifying for the play-off round of the qualifiers. The two teams will take each other on in Ghana on Sunday in what could well be a group deciding game.

But before Bafana Bafana can worry about Ghana, they still have the hurdle of Zimbabwe to get through. Even without the services of suspended on form Royal AM striker Victor Letsoalo, coach Hugo Broos, has a plethora of attacking options to choose from. In his first two qualifiers against Zimbabwe and Ghana, he used a front three of Bongokuhle Hlongwane, Evidence Makgopa as well as vice-captain Percy Tau.

Tau, was then ruled out for the back-to-back qualifiers against Ethiopia, with Broos even going as far as dropping Makgopa for Orlando Pirates striker Tshegofatso Mabasa. Broos then opted for a front three of Thabiso Kutumela, Mabasa and Hlongwane. After a goal coming from the bench, Makgopa was then reward with a start alongside Letsoalo and Hlongwane for the home leg victory.

What has been evidently clear from Broos thus far, is the faith and trust he has shown in young  winger Hlongwane. The Maritzburg United star remains the only player who has started every game of the Broos Bafana Bafana era in attack. Now with the addition of Keagan Dolly, who has been in superb form for Kaizer Chiefs, and the return of Tau, could Hlongwane’s fortunes change?

Well, naturally they shouldn’t. Although happy with how his team performed against Ethiopia the last time out, Broos did lament the lack quality, admitting that, maybe he needed players with more quality to execute his game plan better. With the additions of Dolly and Tau, the quality certainly is there, no should that of Hlongwane’s be taken away.

Therefore the only question is, is Broos brave enough to tweak his Bafana Bafana formation to suit the quality of attackers at his disposal? How can he fit all of Hlongwane, Dolly and Tau in one starting line up you may ask?

Formation tweak would be required

The key to that, would be his midfield combination. Naturally if you are going to have such an attack minded four, the assurance of two holding midfielders is needed. There are plenty of options in the current Bafana Bafana squad. He could easily go with the tried and tested duo of Ethan Brooks and Teboho Mokoena. The familiarity the two have with each other and their teammates could give them an added advantage over the other options at this crucial stage of the qualifiers.

READ | MEET THE SCHOOLBOY THAT ZIMBABWE COULD UNLEASH AGAINST BAFANA BAFANA ON THURSDAY NIGHT!

Alternatively, Broos could opt for the height, poise, as well as natural holding abilities of new addition Sphephelo “Yaya” Sithole. The Portuguese-based midfielder could compliment the energy and technical ability of Mokoena well, offering a solid defensive screen for the centre backs, while offering a good attacking platform from the midfield base.

All three would then feature in a fearsome four-pronged attack

That alteration could then free up Broos to feature a playmaker in his starting line up for the first time. Tau has been known to be effective in that role in the past for Bafana Bafana and might return to it, therefore giving space for his former Mamelodi Sundowns teammate Dolly to operate from the right wing with Hlongwane continuing on the left of Makgopa.

This could be the potential Bafana Bafana line up for the game against Zimbabwe:

What are your thoughts? Comment with your starting line up below.