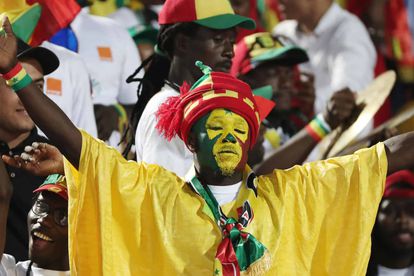 Algeria took a second minute lead thanks to Baghdad Bounedjah’s deflected strike, meaning that the Lions of Teranga were instantly on the back foot. It would have been enough to stun many fans into silence.

However, the Senegal fans maintained a supportive atmosphere, giving the passionate Desert Foxes supporters who turned out in numbers a run for their money in the off-field battle.

You can watch a video of the Senegal fans supporting their team with pride despite being 1-0 down here.

For Senegal, who lost to Algeria by the same scoreline in the group stage, the long wait for a first continental crown goes on as coach Aliou Cisse, the captain of the 2002 runners-up, again fell short in the final.

Senegal paid respect to their fans after their fate was sealed, going over to thank them for their unwavering support. The moment can be viewed in the video below. Fair play to Aliou Cissé’s men.

And it seems the fans learned a thing or two from their coach. Outside, fans were there to congratulate Algeria on the win.

Senegal thought they had won a penalty on the hour when Cameroonian referee Alioum Alioum pointed to the spot for a suspected handball by Adlene Guedioura, but the official reversed his decision after a VAR review.

Niang rounded an advancing Mbohli after a searching ball through from Cheikhou Kouyate but the forward sliced wide of the target from a tough angle, with the Algeria ‘keeper then acrobatically tipping over a rasping drive from Youssouf Sabaly.

The Desert Foxes started to look jaded as Senegal brought on fresh legs in Krepin Diatta and Mbaye Diagne, but Youcef Belaili nearly made it 2-0 when his cross brushed the head of a defender and skimmed the roof of the net.

Sarr blazed over on the volley as Algeria clung on to their advantage in the closing minutes, the final whistle greeted by an outpouring of raw emotion as the North Africans emerged worthy winners of the expanded 24-team event

No winner of Wednesday’s Lotto jackpots: All the numbers and payouts

TMPD issues R5 million worth of fines over the festive season

‘A giraffe with stripes’: Rasta dragged over Sheba the tiger portrait

BREAKING NEWS: Did Rassie Erasmus REALLY own Sheba the tiger?