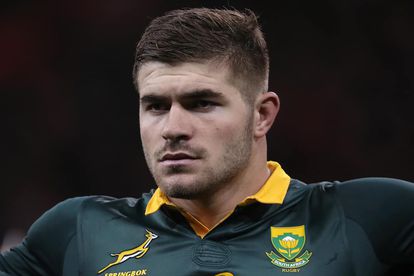 South Africa’s Malcolm Marx during the Autumn International at the Principality Stadium, Cardiff

South Africa’s Malcolm Marx during the Autumn International at the Principality Stadium, Cardiff

No one ever expects a big front rower to be a momma’s boy, but Springbok hooker Malcolm Marx has a special bond with his mother.

The 25-year-old, along with his brother Jean were raised by their single mom, Bernadine in Germiston in the East Rand.

He has risen quickly through the ranks of South African rugby, from representing King Edward School, to the Lions, and eventually donning the famous green and gold of the Springboks.

In a video shot as part of the Boks’ #StrongerTogether campaign, the 2017 SA Rugby Player of the Year opens up on the big role his mom played in his uprising.

“It’s been a long road for the three of us together, but it’s been good.

“A lot of great times. A lot of sad times, ups and downs like everybody has in life.

“To be honest I have never met anybody like her in my life. Not only because she’s my mother, but what she has done and what she’s been through, and how she’s overcome quite a few obstacles in her life.

“She never gave up on us. She sat next to the field. She supported us.”

Marx says he has taken her mother’s resilience with him, and is never going to give up on himself.

“She loves her rugby probably more than I love rugby, which is quite a bit, to be fair.”

The Lions hooker says his aim is to inspire others who, like himself, might have had a bit of self-doubt.

“Which was my personal opinion of myself before I went to KES, and before I came to the Lions and everything.

“I thought ‘ag ja, I will try, but there’s so many other good rugby players out there. I don’t think that will ever happen for me’.”

Marx adds that he is grateful for what his mom has done for him and his brother, and is happy to have made her proud.

“‘Thank you’ isn’t enough for me. I can try and I can say ‘thank you’ as much as I want, but is never gonna be what I truly feel.

“I hope I have made her proud. Myself and my brother, it’s one of our biggest dreams to make sure our mom is proud of us.”

Marx will earn his 26th international cap on Saturday, coming in from the bench as the Boks look to secure victory against Argentina in Salta. A win will, in all likelihood, secure them their first Rugby Championship title, to add to their three Tri-Nations crowns.