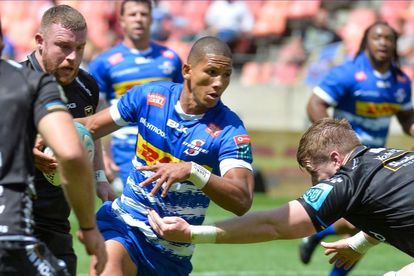 Manie Libbok evades a tackle in the URC match between the Stormers and Dragons. Image: Stormers/Twitter.

Manie Libbok evades a tackle in the URC match between the Stormers and Dragons. Image: Stormers/Twitter.

The Stormers overcame a second half surge by the Dragons to claim a hard-fought 34-26 URC win in Gqeberha on Saturday.

The result sees the Stormers extend their unbeaten home record to 15 games courtesy of a ruthless first half performance.

But the Dragons fought back superbly, claiming a losing bonus-point and outscoring their hosts during a second period that produced tries for props Aki Seiuli and Josh Reynolds while JJ Hanrahan also crossed.

Hanrahan added conversions of wing Jordan Williams’ first-half score and his own try and substitute Will Reed booted a conversion as Stormers’ second-half points were restricted to a couple of Libbok penalties, which followed three earlier conversions for a 17-point haul.

Despite their display of admirable resolve, Dragons’ attempted comeback fell well short as the Stormers held on to away with a victory.