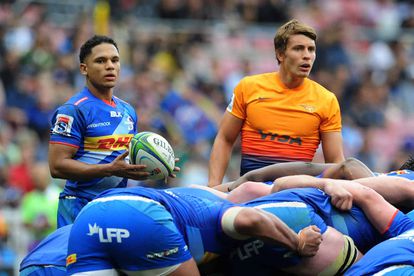 Ruhan Nel scored a crucial try for the second straight weekend as the Stormers ground out a 17-7 win over the Jaguares on Saturday to top the South African Super Rugby conference table.

The outside centre, who notched a post-hooter winning try against the Lions last Saturday, struck after 53 minutes in Cape Town to give the home side a 15-point advantage.

Nel sold a dummy and scored after South Africans pressure created a gap in the Argentine defence at a wet and murky Newlands stadium.

Fly-half Damian Willemse converted for a 17-0 lead that gave the hosts breathing space ahead of a comeback by the visitors which yielded a try from number eight Rodrigo Bruni.

Jaguares fly-half Domingo Miotti converted and the Buenos Aires outfit thought they had scored again when wing Sebastian Cancelliere went over only for the try to be disallowed.

Elsewhere, on a jam-packed day, An illness-weakened Brumbies stunned Super Rugby leaders Waikato Chiefs as the Queensland Reds routed the hapless Sunwolves and Coastal Sharks stormed past the Melbourne Rebels.

The Brumbies, missing several players after an outbreak of mumps in their camp during the week, blew away Warren Gatland’s men 26-14 with a dominant first-half display in Hamilton.

In Brisbane, the Reds bagged their first victory of the season against Japan’s Sunwolves, running in 10 tries in a 64-5 hammering – their biggest ever win.

South Africa’s Sharks, meanwhile, proved too hot to handle for the Rebels in Ballarat, coming out 36-24 on top.

The Brumbies, Australian conference leaders, scored four tries to two, including a double for Pete Samu, to end a 13-match losing streak in New Zealand dating back to March 2014.

Brumbies skipper Allan Alaalatoa praised his players for thwarting a late fightback from the home side.

“We knew the Chiefs were going to come out hard in the second half but I’m really proud of the boys in how we held them out,” he said.

The Chiefs entered the match on top of the Super Rugby ladder but a string of uncharacteristic turnovers and poor discipline contributed to their first defeat of the season.

The Brumbies scored two tries in the opening 15 minutes, one when fullback Tom Banks shrugged off a tackle and the other when rugby league convert Solomone Kata powered past former All Black Aaron Cruden.

Samu added a third, dashing from the back of a scrum to make it 19-0 at half-time, then scored another two minutes after the re-start to make it 26-0.

Cruden finally got the Chiefs on the board in the 48th minute after their first meaningful attack of the match.

They gained momentum with a second to Lienert-Brown while Brumbies prop James Slipper was sin-binned, but the deficit was too much.

The free-flowing Reds finally snared a win after tough losses on the road to the Golden Lions, Jaguares and Brumbies.

It was impressive stuff from Brad Thorn’s men, who dominated all aspects of a lopsided game.

They scored six tries in a stunning first half performance and the rout continued in the second with another four. They were shared between nine players, with Tate McDermott the only one to get a brace.

The Sunwolves’ solitary try in the second half, after the Reds made a raft of substitutions, came from Siosaia Fifita.

“It was brilliant, we’ve been dreaming about that for weeks. To put it into action was awesome,” said Reds captain Liam Wright. “We didn’t change many of our processes (from previous losses), that’s just our system. The win will do us a lot of good.”

Earlier in Ballarat, Springboks winger Makazole Mapimpi bagged a double as the Sharks bounced back from defeat last week.

The Durban-based team scored an early try and they never relinquished the lead.

“There was a lot of running, good skills showcased from both teams,” said Sharks skipper Andre Esterhuizen, with the Rebels unable to build on their opening win of the season last week against the NSW Waratahs.

Mapimpi dotted down after five minutes, but the Rebels bounced back when debutant Andrew Deegan’s cleverly flicked pass sent Wallabies winger Marika Koroibete through for a converted try.

Esterhuizen restored the lead, using brute force to shrug off three tackles on his way to the line.

The Sharks delivered a dagger blow near half-time when Madosh Tambwe finished a sweeping counter-attack to give them a 22-10 lead at the break.

Kerron van Vuuren and Madosh Tambwe were both sin-binned early in the second stanza and the Rebels capitalised with a try to Isi Naisarani.

But Mapimpi got his second after a 19-phase attack, then Curwin Bosch finished off a 95-metre move to ensure victory.

You can get all the latest Super Rugby fixtures and results for the 2020 season here.

Super Rugby 2020: Conference standings after Round 4