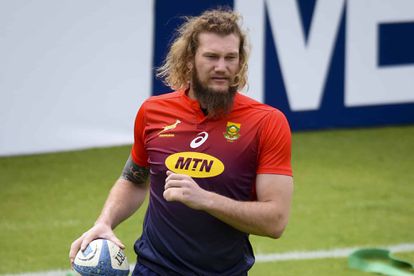 World Cup-winning Springbok lock RG Snyman looks to be on track to make his return for Munster in the new year, the Irish club has announced. Photo: Marcelo Endelli/Getty Images

World Cup-winning Springbok lock RG Snyman looks to be on track to make his return for Munster in the new year, the Irish club has announced. Photo: Marcelo Endelli/Getty Images

Springbok lock RG Snyman is making good progress as he continues his recovery from the ACL injury he suffered on debut for his Irish club, Munster.

LASTED ONLY 7 MINUTES ON MUNSTER DEBUT

Snyman signed for Munster earlier in the year, but lasted only seven minutes on debut before he fell awkwardly while stealing a lineout against Leinster in late August.

Recovery from ACL surgery, similar to the injury suffered by another Springbok star, Handre Pollard, typically takes a minimum of nine months.

As a result, Snyman isn’t expected to feature for Munster until the end of the PRO14 season in May or June – if at all.

Speaking on the Munster YouTube channel, Snyman admitted that the injury was a setback for him, but added that he is progressing well with his rehab work.

‘It was a bit of a surprise and a disaster for me, because it’s not the way I wanted to start my career with Munster,’ Snyman said. ‘Especially with only being here for a short time and with Covid, not being able to get to know everyone, I wanted to build up the respect of the team and my teammates. Obviously going off after five or seven minutes is not the perfect way to do that.

‘Saying that, everyone has been very supportive. I must say, everyone has made it a little bit easier. It is a bit difficult, trying to get to know everyone in lockdown especially, if you can’t go and visit anyone. Luckily, around here everyone is friendly and very welcoming.

‘We are making a lot of progress with it. I must say Ray [McGinley, Munster physiotherapist], who is doing the rehab with me, is very good. I have actually started working a bit harder in the gym, for a change. I am not a big fan of the gym, to be honest, so this is a good time for me to improve a bit on my gym work. It’s actually good to be excited to go to the gym for a change.’

Snyman has played 23 Tests for the Springboks to date.