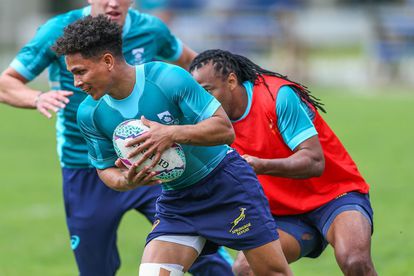 In 2019, as the Blitzboks ran out to contest the final of the Cape Town Sevens, Ronald Brown was in stands, with tears streaming down his face. He was only a spectator.

Fast forward three years and Brown, now a fully-fledged Blitzbok himself, will have to check his emotions again when he runs onto the field on Friday, to not only play at the stadium for the first time, but in his first Rugby World Cup Sevens tournament.

“I am a pretty emotional guy, so will definitely feel that on Friday. The last time I was here, in 2019, I brought a friend who attended his first sevens tournament ever and we started crying when the Blitzboks ran onto the field for that final, such a proud and awesome moment it was for us, even as a spectator. This time I am playing, it is really amazing to realise that,” Brown said as the squad completed their preparations for the tournament.

“I will definitely feel the emotion again, but I prefer it like that. I will be proud and pumped to play in front of my family and our supporters, which is one of my ‘why’s’ in the game. I love playing for my country and to do it in front of the family and supporters will be so, so special.”

READ | SPRINGBOKS CRUSH AUSTRALIA TO GET BACK INTO RUGBY CHAMPIONSHIP

Brown said the send-off for outgoing coach Neil Powell will drive the players.

“We want to send coach Neil off with a special memory. He wants to see effort, that is what makes him happy, so that extra one percent when you are really tired will be for him,” Brown said.

The scrumhalf/sweeper missed the last tournament of the HSBC World Rugby Sevens Series in Los Angeles after he sustained a shoulder injury in Birmingham where the Springbok Sevens won the gold medal at the Commonwealth Games and that perked him up for the final showpiece of the 2022 season.

He recovered in time to make the final selection and said he is very keen to get onto the field for his country.

“I have not played at a World Cup and was desperate to make this one. I did not mind losing out playing in Los Angeles, knowing that it will help to get to Cape Town. I have played in the World Series, so did not mind missing a tournament, but this World Cup Sevens is going to be special. At this stage I am feeling more excitement than nerves, but that will come closer to kick-off,” said Brown.

Brown was the leading points scorer in the 2022 World Series for his team, with 194 points, which included 18 tries and 52 conversions, but it was his playmaking abilities that was missed most in Los Angeles. With Brown back, the Blitzboks will be sharper on attack.

WATCH: EBEN SHARES A BEER WITH WALLABIES PROP AFTER ALTERCATION