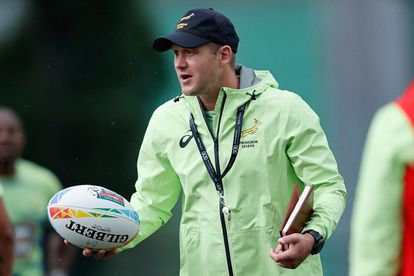 The Blitzboks will have to play as a team if they wish to get past defending Hong Kong Sevens champions Fiji in the quarter-finals on Sunday. Photo: SA Rugby website

The Blitzboks will have to play as a team if they wish to get past defending Hong Kong Sevens champions Fiji in the quarter-finals on Sunday. Photo: SA Rugby website

The Springbok Sevens side will have to play as a team if they wish to get past defending Hong Kong Sevens champions Fiji in the quarter-finals on Sunday, 6 November.

MUST READ: SPRINGBOKS VS IRELAND: KICK OFF TIME,TEAM SHEETS AND MUCH MORE…

That is the view of Blitzbok assistant coach Philip Snyman after the team finished second in Pool B of the HSBC World Rugby Sevens Series opener in the Hong Kong Stadium on Saturday, and now face the Pool C winners in the last eight of the competition on Sunday.

Two close pool defeats on Saturday, against Great Britain (12-10) and France (19-17), would normally see a team miss out on the quarter-finals, but Uruguay did the Blitzboks a huge favour by beating Great Britain.

ALSO READ | SPRINGBOKS V IRELAND: WHO WILL BE THE REFEREE ON SATURDAY?

This resulted in South Africa finishing second due to a better point differential than both their British and South American opponents.

“We did not play well on Saturday,” Snyman said.

“It started against Great Britain, where the starting team just could not get us any platform as they lacked energy and effort.

“We made some changes to the team in the second half, and it went much better, but it was a little too late.

“Against France, we made three changes to the team that started and they were much more effective and although we were pipped in the end, our effort in that game cannot be faulted.

“Yes, here and there mistakes were made, like a player not making a final pass or dropping the ball, but the team effort was encouraging.”

Snyman said Uruguay’s win over Great Britain did them a massive favour, but the reality is that they are in the knock-out round now.

“You don’t really know who you are getting in the quarters and you need to win that to get to the final anyway, so whoever the opponent, you need to be at your best to progress,” he said.

Snyman admitted they were thrown a lifeline, but now they need to use that on Sunday against Fiji, who won the Rugby World Cup Sevens in Cape Town in September.

“We are in the playoffs despite today’s mishaps, so we do get another chance and it will be silly not to make the best out of that,” said Snyman.

“There were more than enough positives from the French game. We had one bad bounce and a final pass that did not go our way and affected the final result, but the effort was there and that was what we are looking for.”

The main lesson from the day was that they need to play as a team, Snyman said: “We have to take that lesson to heart. You cannot play alone; we need to do this as a team to be successful. The players must use the structure provided and buy into that. If we do that on Sunday, we will have a chance in the tournament.”