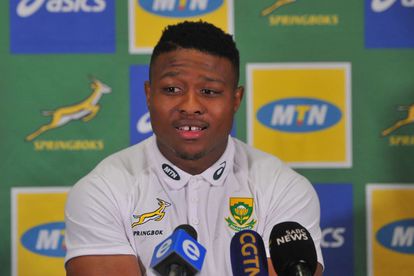 Springbok wing Aphiwe Dyantyi has decided to appeal his four-year ban for a doping offence.

‘FAILED TO SATISFY THE BURDEN OF PROOF’

In mid-December, an independent panel handed down a four-year suspension to Dyantyi after finding that he had ‘failed to satisfy the burden of proof to establish that his positive dope test was not intentional’.

The South African Institute for Drug-Free Sport (SAIDS) subsequently released a statement both confirming and accepting the decision rendered by the panel.

‘Mr Dyantyi is effectively banned from participating in sport from the date of 13th August 2019 when he was provisionally suspended to 12th August 2023,’ the SAIDS statement confirmed.

‘The athlete’s rights are reserved to seek relief through lodging an appeal should he believe that he has substantive grounds for an appeal.’

Dyantyi had 21 days in which to consider an appeal and it was confirmed on Thursday that he has opted to explore that option.

SAIDS CEO Khalid Gelant has confirmed that the appeal was filed within the prescribed three week deadline and that Dyantyi has outlined his grounds for appeal.

In the next step, SAIDS will now liaise with the appeal board and the player’s legal team to co-ordinate a date for the appeal.

DYANTYI HAS PLAYED 13 TESTS FOR THE SPRINGBOKS

The whole saga began in mid-2019 shortly before the Springboks departed for the Rugby World Cup in Japan.

Both Dyantyi’s ‘A’ and ‘B’ samples returned positive for no fewer than three banned substances following a national training camp.

Dyantyi, still only 26-years-old, has played 13 Tests for the Springboks to date.