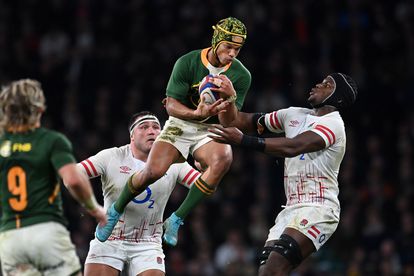 Kurt-Lee Arendse scored a try that has to be a contender for the score of the year for the Springboks.

Sparked by Damian Willemse from deep in the Springbok half, a flowing move ended with Arendse sprinting into the corner.

Cheslin Kolbe and Canaan Moodie have scored great individual tries this season but the team effort on this one could make it the top try for the Springboks in 2022.

It came as the Springboks snapped a Twickenham losing streak despite going down to 14 men on the hour.

An eight-year wait for a win in the English capital was ended despite England threatening a late rally with Henry Slade finally crossing for his side’s first try inside the last ten minutes.

The Springboks wrestled control of the contest away from England in the first half and would not relinquesh it.

England’s scrum was no match for the power of the Springbok eight which kept Eddie Jones’ men from gaining any sort of momentum.

Kurt-Lee Arendse’s match ended in the 78th minute with the victory all-but sealed.

Having scored his seventh try in as many Tests Arendse put in a shift on defense as well.

Kurt-Lee Arendse is among the players of this season for the men in Gree and Gold.

Springboks end year on a high

The Springboks played with more fluency than they have almost all year, as they turned on the style at Twickenham.

England lacked discipline at the breakdown as well as the setpieces and were humbled by a superior Springbok team.

The Springboks won the physical battles early and held their discipline which proved enough to get the victory.

Another try from Eben Eztebeth put the Springboks out to a big lead and not even the red card to Thomas Du Toit could derail the victory march.

The Springboks won eight of their 13 Tests this year and two of the four matches played on the November Tour.