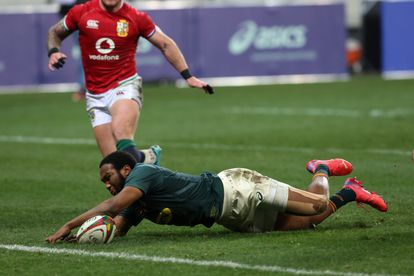 From 16 June, Showmax Pro viewers will be able to watch Two Sides, which is a fascinating behind-the-scenes look at last year’s historic British and Irish Lions series against the Springboks.

The 2021 tour was another chapter in the 130-year history of the Lions touring South Africa, which ended up being a riveting tale on and off the field.

Relive the British and Irish Lions tour of South Africa

Even before the tour kicked off, it was under threat due to unprecedented complications in the era of the Covid-19 pandemic.

Two Sides looks at how the tour was rescued from the brink of cancellation, which would have been nothing short of a financial disaster for SA Rugby.

The series shows us exclusive footage and insight on all the struggles that players and management had to endure. Preparing for the British and Irish Lions is one thing. Doing it while working in the confines of bubbles and training with players in and out isolation added to the challenge.

All of this served to heighten tension and emotions going into a series that is a treasured opportunity for any Springbok player as it only comes around every 12 years.

Through interviews with the players, we get to see how this current group of South African players desperately wanted to add a coveted series trophy that could sit alongside the World Cup.

Two Sides not only takes us into the Springbok changing room, but also shows the British and Irish Lions up close, giving a palpable sense of the passion and sacrifice required for someone to don the famous red jersey.

From Lukhanyo Am’s family in the Eastern Cape to the hometown of Liam Williams in South Wales, the series gives so many great personal stories from the players as well as their relatives that truly tell both sides of the story.

As for the rugby itself, it ended up being yet another classic clash between the teams. While it was sad that each game had to be played in an empty stadium, the eerie silence from the stands almost seemed to magnify the physical battle.

Without a noisy stadium, every collision became clearly audible. With no fans at the ground, the players were spurred on only by their own passion and tension. The exclusive on-the-ground footage also gives a better understanding of the unique environment the players had to battle in.

Off the field, the series became an endless stream of drama. From complaints about referees to a leaked video from Rassie Erasmus that went viral, plus all the surrounding focus that such a high-profile series brings all added to the gripping nature of the tour.

When the series ended with a hard-fought South African victory, it became another moment of glory for a Springbok team that continues to make history. Two Sides really is a must-watch to give all fans a greater understanding of just how special their achievement was.

The series will be available to Showmax Pro subscribers on 16 June 2022 and on the standard Showmax offering from 1 July.