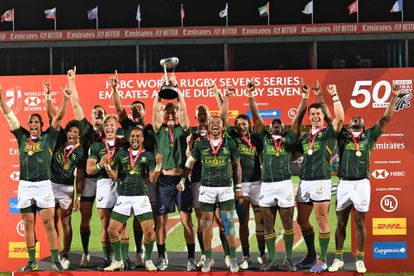 Members of the South Africa men’s team celebrate with the trophy on the podium after winning the HSBC Dubai Sevens Series men’s cup, at The Sevens Stadium in Dubai on December 7, 2019. (Photo by KARIM SAHIB / AFP)

Members of the South Africa men’s team celebrate with the trophy on the podium after winning the HSBC Dubai Sevens Series men’s cup, at The Sevens Stadium in Dubai on December 7, 2019. (Photo by KARIM SAHIB / AFP)

A mix of youth and experience did the job for the Blitzboks in Dubai, as they secured the title by beating New Zealand 15-0 in the final.

The South African squad consisted of the likes of man of the tournament, Rosko Specman and the country’s all-time leading try-scorer Seabelo Senatla, as well as inexperienced players such as Kurt-Lee Arendse.

After a jittery start, where they allowed Kenya back into the contest, they seemed to gradually gel as the tournament progressed.

Coach Neil Powell noted how the team got better over the three days.

“I was wondering after that Kenya game if the guys would be able to find each other during the tournament – as we progressed in the tournament they did and became a very tight team at the end,” said Powell.

Specman, Senatla spent the bulk of last edition of the world playing fifteen-man rugby, along with Ruhan Nel.

Powell was impressed by how quickly they connected with the new players.

“Some of the younger players did not play with the older guys before and they needed to find each other out there,” said Powell.

“Someone like Kurt-Lee (Arendse) has not played with Ruhan (Nel) or Rosko (Specman) before, so that was always going to be a challenge. They pulled together as a team over these six games and I am very proud of their effort.”

More impressive was how the Blitzboks completely shut New Zealand out in the final, denying them of any points.

Powell says suck tight defence could serve his charges well going into the rest of the season.

“The final against New Zealand was incredible and they deserve a lot of credit. It was very tight. In the first half there were a couple of end-to-ends and they scrambled so well,” he added.

“We had turnovers and attacked, but their scramble defence was excellent and we just could not score. We stayed in control of the match though and that was the difference. From the kick-off we had control.”

For their next tournament, the Blitzboks can call on home support, as they look to collect as many points early on.

The next leg of the series is the Cape Town Sevens, which takes place between 13-15 December.

“Coming to Dubai, it was not really about the outcome, but the process we needed to implement. We had a great effort out here and if we can repeat that, we can be successful in Cape Town again,” said Powell.