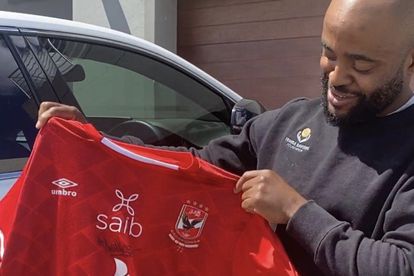 Bavuma took to social media to thank Mosimane for the delivery of a signed Al Ahly jersey, which had the number 10 and name of Mosimane on the back.

“Thank you Bra Pitso for the gift, I’m so relieved as a Chiefs fan it’s not a Sundowns shirt,” Bavuma joked. “PS: All the best for the FIFA Club World Cup 2022!”

Mosimane has lifted five trophies with Al Ahly, but has yet to put pen to paper on a new deal with the Egyptian powerhouse club as negotiations appeared to have somewhat stalled in recent times as he entered the final six months of his current contract.

However, recently speaking to MBC Egypt, Mosimane hailed the club’s president Mohamed ‘Bibo’ El-Khatib for bringing him to Egypt, and confirmed he will ‘stay’ at the club.

“Mahmoud El-Khatib [Al-Ahly’s president] did something unexpected after many European coaches in Al Ahly went to a coach in South Africa,” he said.

“He told me that you could change the history of Al Ahly. Not many people knew me, they know me from playing against Ahly and Zamalek [with Sundowns].

“But I don’t come with the big European CV, but they knew I won the CAF Super Cup, Champions League and gone to the Club World Cup.

“He took a very big risk on me, he rewarded me and gave me a big opportunity and that’s why I’m still here. I know there were talks, but I’m here and I will be here and I will stay here.

“So I’m humbled to be able to coach a big team. I want to leave small footprints after the big footprints that Manuel Jose left at the club.”

Despite growing frustration over the stalled contract talks, Al Ahly sporting director Sayed Abdelhafiz this week came out in praise of Mosimane, even though he could not confirm if an agreement between the two parties would be found.

“Al Ahly were very successful under Mosimane. Frankly, he deserves something great because he won a lot of titles,” he said, as per Kingfut.

“It’s true that the way Al Ahly is run helps any individual who comes to work here, but it’s important that Mosimane gets what he deserves.

“Al Ahly has a method and policy in negotiations. The two parties succeeded together, whether Mosimane continues with Al Ahly or not. There will certainly be a clear and explicit agreement that will be announced at the proper time.”

“According to his contract, whether he decides to continue or he leave he will remain until the end of the season.

“As for what is rumoured about his departure in the current period, it doesn’t make sense for us criticize something and then do it.

“The main takeaway is that Pitso achieved a lot with the club, whether he stays or not.”