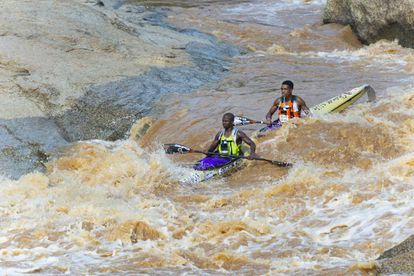 Defending Non-Stop Dusi Canoe Marathon champions Thabani Msia (front) and Msawenkosi Mtolo (back) will return to defend their crown at the Dusi-in-a-day on Friday morning.

Defending Non-Stop Dusi Canoe Marathon champions Thabani Msia (front) and Msawenkosi Mtolo (back) will return to defend their crown at the Dusi-in-a-day on Friday morning.

The 2021 Non-Stop Dusi brings down the curtain on the unusual rescheduled KZN canoeing calendar reshaped by the Covid-19 lockdown.

Hot on the heels of the successful MyLife Dusi, which was held a full month later than normal, the brave men and women who will start the Non-Stop Dusi can look forward to water releases from Henley Dam and Inanda Dam and clear, mild weather with temperatures expected to peak at around 27 degrees in the afternoon.

Big guns out for non-stop Dusi

This year will see the return of the 2020 champions Msawenkosi Mtolo and Thabani Msia, eager for another crack at the title they claimed from the race’s most decorated paddler Sbonelo Khwela.

Mtolo has been in solid form throughout the Dusi season and the Team MyLife paddler finished fifth at the Dusi while his partner Msia ended seventh which makes them the boat to catch going into Friday’s race.

Amongst the chasers will be Euro Steel/Red Bull’s Khwela who is teaming up with Thomas Ngidi for the event. Ngidi didn’t paddle the Dusi this year and Khwela has been battling to shake physical issues which could put them under pressure.

There will be an all-Leslie boat on the start-line with Ross and Dominic taking on the Dusi-in-a-day along with another boat of relatives as Raymond and Mlandeni Radebe, who finished 21st and 32nd at this year’s Dusi respectively, line up for the challenge.

From a women’s perspective, Dusi runner-up and Euro Steel star Jordan Peek will be taking part in her K1 while her mother Kim hops into a K2 with Lorna Oliver.

Amongst the other women entries is the K2 of Tracey Oellermann and Cara Waud while there are a handful of mixed doubles entered.

The most-decorated Non-Stop medallist Rhys Foster is back for a 22nd Dusi-in-a-Day, partnering another stalwart James Tutton who is aiming for his twentieth finishers medal.

The race will see one K3 brave the route with Debbie Lewis, Sipho Canham and Jason Breedt looking to guide the three-person craft to Durban.

The race will start at 5:45am with the rules stipulating that all paddlers must go under the College Road Bridge, however the race opens up from there as paddlers have to decide which stretches to portage and paddle.

As a result of the race taking place later in the year, the later start has forced changes to the traditional cut-offs at Finger Neck and the Inanda dam wall, with the final cut-off at the N2 bridge ensuring that all paddlers are accounted for and no boats are left trying to complete the race in the dark.