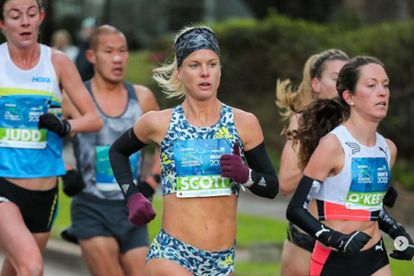 Two-time South African Olympian Dominique Scott-Efurd set a new personal best in finishing third at the recent Houston Half-Marathon, when she produced the second-fastest time ever by a South African woman over 21.1km.

The 29-year-old competed in the 5 000m and 10 000m at the Tokyo Olympics, but showed her quality on the road over the longer distance in Houston, on a chilly, windy (20km/h) morning.

Kenya’s Vicoty Chepngeno crossed the line first in Houston in 65:03, followed by American Sara Hall (67:15), which was 10 seconds off Molly Huddle’s American record.

Scott was in a group who went through the 15km mark in 47:51 (67:18 pace) and she held on courageously over the final 6km to carve more than three minutes off her previous best.

It was a history-making race as Fiona O’Keeffe ran the fastest debut half marathon ever by an American to finish fourth with Emile Durgin clocking 67:54 for sixth.

O’Keeffe and Durgin both moved into the top six on the all-time US list, meaning half of the top six performances in US history were set in Houston.

Writing on Instagram post-race, Dominique Scott-Efurd said: “Yesterday was a good day! I think I surprised everyone with that run, even Joe and myself, but I felt like I was right where I belong! Thank you for all the love and support.”

She also congratulated her fellow competitors saying: “We pushed each other and elevated the game! And a big congrats to @sarahall3 on your shiny new American Record! Was an honor running with you in your historic race.”

In a separate post Scott-Efurd wrote: “South African 20km Record. Yesterday I found out that my 20km split of 64:04 broke the National Record!! Proud to put my name in the record books and continue the legacy of South African road running.”

The previous 20km record was held by De Reuck.

Scott-Efurd , who also clocked a new PB for 10km and 15km, said: “I’ve learned that running often doesn’t go our way, but hard work will ALWAYS be rewarded (just not always on our timeline) If you’re going through a slump, I encourage you to keep grinding and believing. Your breakthrough just might be right around the corner!”