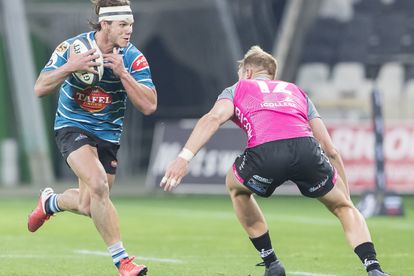 Griquas vs Pumas: While there are scenarios where both sides could reach the Currie Cup semi-final, the winner of this contest will be assured of a place in the last four.

Griquas vs Pumas: As it happened

After Griquas were awarded an early penalty against the run of play and George Whitehead gave the hosts the lead from the tee, the Pumas began to dominate.

After a period of sustained pressure for the Pumas they finally got over the line just before the half hour, having failed to score when Adre Smith was sin-binned as Griquas did all they could to keep out the visitors.

Tapiwa Mafuwa scored but not before a long TMO referral which failed to find compelling evidence to overturn the onfield try decision.

Moments later the Pumas though they had another but this time the TMO spotted Sebastian de Klerk’s foot hitting the touchline before he set Shane Kirkwood in.

The Pumas still held the lion’s share of possession, but it appeared that frustration began to set in, which gave Griquas a platform to attack from which they won a penalty, but Whitehead fired a kick for the lead wide three minutes before the break.

At the breakdown, the match was fiercely contested by both sides and that competition ensured neither side could gain any attacking rythym. The Pumas favoured moving the ball while Griquas were direct in attack, hammering it up with their forwards and big centre Jonathan Francke.

Playing into the wind the Pumas managed to start the second half well and they were rewarded with a penalty which Eddie Fouche goaled to make it 8-3 in the visitors favour.

The TMO was again pressed into action when the Pumas scrambled the ball over the line but a knock was found in the build-up and the contest remained desperately close after ten minutes in the second period.

Whitehead narrowed the gap from the tee and with 12 minutes gone in the second half it was a two-point game.

In a gamechanging lapse in concentration, Griquas allowed De Klerk to sneak in on the overlap, shortly after the restart. Fouche couldn’t master a diabolical wind, but the score was 13-6 in the Pumas favour.

That score forced a change in mindset from Griquas who rejected a kick at goal in favour of a lineout five out but an errant throw in allowed the Pumas to clear their lines. Moments later similar events played out with Griquas again failing to score.

When the Pumas got a goalable penalty, Fouche had a shot but the wind batted his effort away and it stayed a one-score game.

After a period of sustained if somewhat unimaginative attack, Griquas finally broke through, thanks to a neat step from Chris Hollis who powered over despite the attentions of two defenders. Whitehead nailed the conversion under pressure.

A contentious call late on gave the Pumas a platform to snatch victory as it was ruled that Griquas deliberately knocked the ball down as the Pumas tried to clear it from an under-pressure scrum. They rejected the shot at goal from out wide and set out to get over the line for a third time.

They wouldn’t score and after the final whistle a few punches were thrown which the citing commissioner will need to take a good look at.

Griquas clinched their spot in the semi-finals having started the match one log point ahead of the Pumas, who will now have to wait for the outcome of the Sharks vs Western Province match. WP will need to win with a bonus point or beat the Sharks by 24 points to snatch fourth from the Pumas.

When Griquas clashed with the Pumas in the third round in Nelspruit, the Lowvelders snuck through by 26-22, but having won their matches last weekend, both will be oozing confidence for Saturday’s encounter.

Griquas have named an unchanged starting lineup for this encounter, coming off a brilliant victory over Western Province that put them in prime position to make the last four.

This match is likely to be Eduan Keyter’s last in Kimberley before he leaves to join the Sharks for the United Rugby Championship.

The Griquas loose trio of Ruan Steenkamp, Hanru Sirgel and Gideon van der Merwe have been the key to their push for the top four and must stand up again if they are to book a trip to Loftus or Kings Park.

In the opposing camp, the Pumas have also benefitted from continuity in selection.

Pumas hooker Simon Westraadt comes into the encounter as the tournament’s joint top try scorer, and you wouldn’t bet against him, adding to that tally if that Pumas maul gets going.