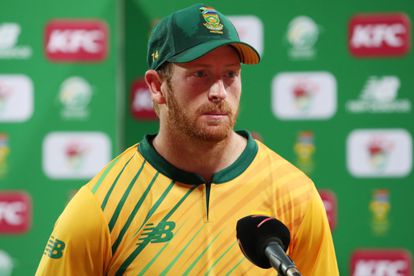 A career-best 81 off 46 balls by Heinrich Klaasen propelled the Proteas to victory in the second T20I against India on Sunday. Photo: Muzi Ntombela/Sports Inc

A career-best 81 off 46 balls by Heinrich Klaasen propelled the Proteas to victory in the second T20I against India on Sunday. Photo: Muzi Ntombela/Sports Inc

Wicketkeeper-batsman Heinrich Klaasen smashed 81 off 46 balls to lead South Africa’s tricky chase as they beat India by four wickets in the second Twenty20 international on Sunday.

Needing 149 for victory on a hot and humid day in Cuttack, South Africa rode Klaasen’s fourth T20 half-century to achieve their target in 18.2 overs and lead the five-match series 2-0.

South Africa’s bowlers, led by pace spearhead Kagiso Rabada, set up victory after they kept India to 148-6 after deciding to field first.

The tourists suffered a pre-match blow when wicketkeeper-batsman Quinton de Kock was ruled out with a hand injury but Temba Bavuma’s side kept up the momentum from their opening win.

Bhuvneshwar Kumar put South Africa in trouble at 29-3 inside six overs on a seemingly tough batting pitch before Klaasen and Bavuma, who made 35, put on 64 runs to put the chase back on track.

Kumar, who returned figures of 4-13, took down Reeza Hendricks and Dwaine Pretorius in his first two overs and then bowled previous match hero Rassie van der Dussen, who made 75 in his team’s opening win.

Klaasen soaked the pressure and the humidity with his clean hitting.

He raised his 50 in 41 balls and took apart the Indian attack to make the target look simple with the in-form David Miller for company.

Klaasen hit seven fours and five sixes before departing, but the job had been done and the left-handed Miller hit the winning runs to finish with 20 not out.

Earlier Rabada sent back Ruturaj Gaikwad for one to bring up his 50th T20 wicket for South Africa and returned figures of 1-15.

Left-handed opener Ishan Kishan (34) and Shreyas Iyer (40) then attempted to rebuild the innings in a 45-run partnership that was broken by fast bowler Anrich Nortje, who took two wickets.

But Dinesh Karthik hit an unbeaten 30 off 21 balls to give the team a late push during his 36-run unbeaten stand with Harshal Patel but the effort was not enough.