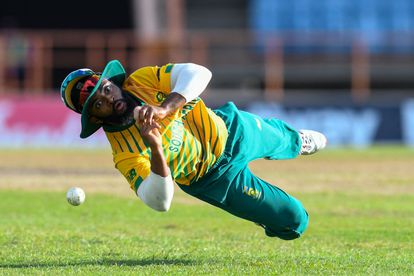 The Proteas have won the toss and elected to bat in the second One-Day International against India on Sunday. Photo: AFP via Getty Images

The Proteas have won the toss and elected to bat in the second One-Day International against India on Sunday. Photo: AFP via Getty Images

The 2022 T20 World Cup tournament begins on October 16 when the First Round teams do battle, with the final set to be held at the MCG on November 13 as the Proteas go in search of a historic ICC world title.

The South African team has certainly shown some encouraging signs of late as the likes of Rilee Rossouw and Tristan Stubbs have added firepower to the batting lineup, while Tabraiz Shamsi and Lungi Ngidi are world-class bowlers in this format of the game.

On Tuesday, Cricket South Africa officially unveiled the Proteas squad for the World Cup, with Temba Bavuma named to lead the side after recovering from a serious elbow injury.

The 15-player squad and three travelling reserves will also make the trip to India ahead of the tournament for the three-match T20I series later this month.

White-ball captain Temba Bavuma will make his return to the national fold after demonstrating a full recovery from a left elbow injury suffered in the T20I series against India in June.

Rassie van der Dussen has been ruled out of the tournament due to a fracture of his left index finger that he sustained during the second Test against England in Manchester. He will require surgery and is expected to take up to at least six weeks to recover.

All 15 players are capped, with 22-year-old Tristan Stubbs receiving his maiden World Cup call up following an impressive outing in the recent T20I series against England. Other notable selections include Rilee Rossouw and Wayne Parnell, with the selectors naming three travelling reserves in Bjorn Fortuin, Marco Jansen and Andile Phehlukwayo.

The squad departs for India on 23 September.

CSA Convenor of Selectors Victor Mpitsang said: “This has been a really tough squad to select, simply because we had so many players in excellent form over the past few months and performing at a level that made the selectors sit up and notice them.

“Someone like Tristan Stubbs who was not in the frame a year ago has done incredibly well to force his way into the mix based on his performances and his selection should be an inspiration for every young player out there. We are also delighted to welcome back our captain Temba Bavuma from injury and we have no doubt his return will further galvanise the team.

“This group of players showed off their brilliant skill and talent when they overcame England in England recently. These sort of performances only bode well for us heading to the World Cup. Overall we are delighted with mix of players that have been chosen and look forward to watching them represent the country in Australia.”

Here are all the squads announced so far for this year’s tournament:

Afghanistan: Yet to be announced

New Zealand: Yet to be announced

Bangladesh: Yet to be announced

India: Yet to be announced

First Round Group A

Namibia: Yet to be announced

Netherlands: Yet to be announced

Sri Lanka: Yet to be announced

United Arab Emirates: Yet to be announced

First Round Group B

Ireland: Yet to be announced

Scotland: Yet to be announced

West Indies: Yet to be announced

Zimbabwe: Yet to be announced