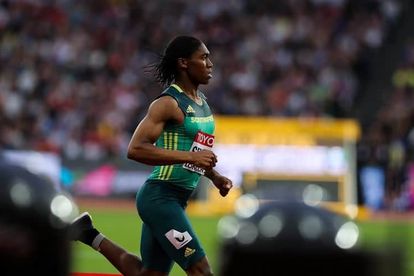 LONDON, ENGLAND – AUGUST 11: Caster Semenya of South Africa in the semi final of the women’s 800m during day 8 of the 16th IAAF World Athletics Championships 2017 at The Stadium, Queen Elizabeth Olympic Park on August 11, 2017 in London, England. (Photo by Roger Sedres/ImageSA/Gallo Images)

LONDON, ENGLAND – AUGUST 11: Caster Semenya of South Africa in the semi final of the women’s 800m during day 8 of the 16th IAAF World Athletics Championships 2017 at The Stadium, Queen Elizabeth Olympic Park on August 11, 2017 in London, England. (Photo by Roger Sedres/ImageSA/Gallo Images)

Caster Semenya doesn’t just win. She shuts a lot of people up in the process, and that’s what we absolutely idolise her for.

She’s faced intense scrutiny over her physical appearance and has even seen her fellow professionals question her right to race. But not once has Semanya let the watching eyes of the world hold her back.

With the Commonwealth Games 2018 just a stride away, we decided to look back at some of her finer moments in the sport. She’s made us incredibly proud to be South African time and time again. So here’s hoping our queen is ready to slay again:

Six of the best from Caster Semenya:

A most deserving flag bearer

Semenya, 21, was the team’s official flagbearer at London 2012 and wore a smile so wide it could have stretched all the way to South Africa!

Sandwiched between Somalia and Spain, the South Africans emerged into the impressive Olympic stadium to be greeted by rapturous applause by the 60,000 spectators, headed by our very own golden girl.

“Gold” things come to those who wait

Caster has had a lot of criticism come her way from British athletes in the past. Most of it came after the 2012 Olympic Games in London, which is kind of a shame. As we’ll learn later, Semenya is ace at silencing her haters.

Two years after the IAAF spectacularly mishandled their gender-testing inquiry into our girl, she roared against the tide of doubt that flowed towards her. She initially clocked a time of 1:57.23 seconds in the 800m to take a silver medal.

But the winner of that race, Mariya Savinova, was implicated in the Russian blood-doping scandal that rocked the sporting world. She was stripped of her titles, and Semenya was finally upgraded to gold in 2017.

Three golds at the African Championships

The highlight of everyone else’s career proved to be a mere warm-up for Caster, given what was coming her way in 2016. In the four-day tournament, she claimed gold in the 400m, 800m and 1500m. Jeez, leave some for the mortals, would you?

If you thought three career-defining wins in four days was impressive, then you’ll be mightily impressed with what Caster Semenya can do in four hours.

She set world-leading times in the 400m and 800m, before completing a hat-trick of national title wins with the 1500m at the South African Championships in 2016. In turn, Semenya became the first athlete to win all three titles at the championships.

Okay, so she ended up winning her first Olympic gold by default. Caster had something to prove in 2016, when the games headed over to Rio de Janiero. My word, did she produce the goods on a balmy evening in Brazil.

In the 800m, she stormed into first place with another virtuoso display. The gold was rightfully, undoubtedly hers. The victory sent South Africa into raptures. However, there’s no accounting for sore losers these days…

Putting the Brits in their place on their own damn turf

The beautiful thing about Caster Semenya is just how salty she’s made her opponents. Both on and off the track, her enemies have taken a swipe at her. But every time they come for the queen, they miss.

Her whole career has been plagued by vile insults and sub-human treatment at the hands of others. That somewhat intensified when the 16th IAAF World Athletics Championships made their way to London 2017.

Paula Radcliffe said it was “unfair” that the South African was allowed to compete against women. A nameless rent-a-gob chimed in too, having a go at Caster’s physical appearance.

Even British 800m competitor Lynsey Sharp had previously complained that it is “two separate races” with Semenya on the track (NB: Sharp finished sixth in Rio. What are your excuses for the other four athletes in front of you, hun?)

Semenya is all about actions, rather than words though. She glided her way to the 800m world title, leaving a trail of befuddled Brits in her wake. Some victories are just that little bit sweeter, aren’t they?