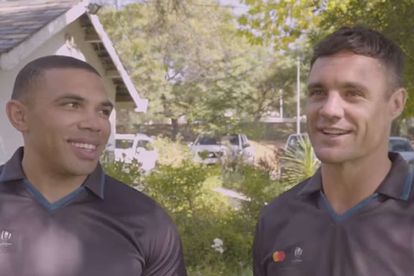 Rugby legends, Bryan Habana and Dan Carter recently surprised the women of the Pirates Women’s Rugby Club in Johannesburg to talk about all things rugby.

The surprise was initiated by Mastercard, who is a Worldwide Partner of the 2019 Rugby World Cup, and who ultimately chose Habana and Carter as their Rugby World Cup ambassadors.

Mastercard is set on strengthening its commitment to women’s rugby in South Africa and invited the two rugby players for the surprise visit.

The unsuspecting women were watching a Dan Carter tutorial video as part of their usual training session, when Habana, one of the top test try-scorers of all time, and Carter, New Zealand star and three-time winner of the prestigious World Rugby Player of the Year award, walked into the change room.

“The team was caught completely off-guard, and immediately started screaming and cheering when they saw their heroes in the flesh,” Chanel Alberts, Pirates Women’s Rugby club coach later told the Mastercard Newsroom.

Habana and Carter went on to share their personal experiences, provided encouraging and motivational tips on the importance of club rugby and personally coached them on key plays to give the team an advantage on the field.

“Meeting these rugby legends was not just an unforgettable experience, but truly a Mastercard masterclass. We have incorporated one of their plays into our game plan, which has become the recipe for our success,” Alberts said further.

In a video, Habana later said that the growth of women’s rugby globally has been absolutely phenomenal.

In fact, according to World Rugby, women’s rugby is one of the fastest-growing team sports in the world, with more than 2.7 million women and girls playing the game.

“The beauty of rugby is that if we were all the same, it would be an unbelievably boring sport,” Habana said further.

“As a historically male-dominated contact sport, women have until recently not considered rugby as a career option. But the benefits of the organized game are hugely beneficial for women, who have throughout history felt disempowered due to their gender.

“Rugby is extremely empowering and liberating for women as it gives you the freedom to be yourself and that’s powerful. The game specifically emphasizes mental resilience, courage in the face of adversity, and camaraderie,” Alberts said further.