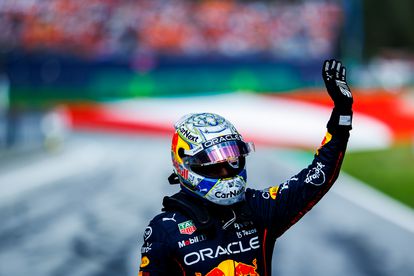 Having boxed a second time when the virtual safety car was deployed on lap 48, Verstappen looked comfortably poised to win although Lewis Hamilton seemed the major threat to that as he and Russell in third had both extended their opening stint on medium tyres and pit for hards which took them deep into the race.

F1.com reports: “The events after a Lap 55 Safety Car dashed any hopes of victory that Hamilton harboured, however.

“The seven-time champion stayed out on mediums to inherit the lead while Verstappen came in for softs, followed by Russell and Leclerc, for the restart on Lap 61. In that restart, Verstappen swept past the Mercedes for the lead, with Russell and Leclerc following suit to pry Hamilton away from the podium.

“Hamilton ended up fourth at the flag as Carlos Sainz and Sergio Perez – the former held back by a calamitous Ferrari pit stop earlier on, before a five-second penalty for an unsafe release in a later stop – battled late on for P5. That allowed Alonso and Norris to close in too, and when the penalty kicked in Sainz was dropped to eighth, promoting Perez to fifth, Alonso to sixth, and Norris to seventh.”