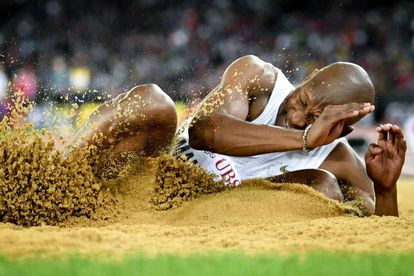 In a tweet from AIU the anti-doping body declared that its disciplinary tribunal had banned Manyonga for “four years from December 23, 2020 for whereabouts failures, his second violation of the World Athletics anti-doping rules”.

Manyonga, who was crowned world champion in 2017, finished second at the Rio Olympics in 2016, but will now almost certain to miss the rescheduled Tokyo Games later this year.

Why has he been banned?

According to the rules laid out b the IAAF, athletes must let authorities know their intended whereabouts to allow anti-doping officials to find them.

If an athlete fails to show up or give wrong information three times in a year they can be punished. American sprinter Christian Coleman will miss the Tokyo Olympics after a similar indiscretion.

The AIU revealed that Manyonga missed the first scheduled test on November 26, 2019, and was then too imprecise on location details for two others in 2020.

In 2012, Manyonga, also Commonwealth champion in 2018, was banned for 18 months after testing positive for recreational drug crystal meth (methamphetamine).

Manyonga has openly admitted to struggling addiction and in May 2020 found himself in trouble with the law after being fined‚ in terms of the Disaster Management Act‚ when he was caught engaging in public drinking and contravening lockdown restrictions in Stellenbosch. The long jumper was ordered to appear in court on or pay a R2‚500 admission of guilt fine.

The 30-year-old, who is the current African record holder with a best of 8.65 metres, has the option to appeal the ban at the Swiss-based Court of Arbitration for Sport. With the Olympic games just weeks away it would be a big surprise to see him in Tokyo.