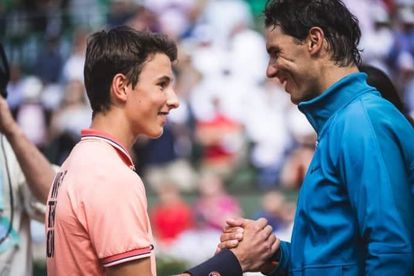 Top seed Rafael Nadal treated the Philippe-Chatrier crowd and an admirer to a rally of a different kind after ending Richard Gasquet’s hopes on Saturday.

Nadal, chasing a record 11th title at Roland Garros, hardly broke a sweat in dispatching the Frenchman 6-3, 6-2, 6-2 and when asked by courtside presenter Marion Bartoli if he’d play against a ball boy, the Spaniard hardly hesitated.

After handing the ball boy one of his Babolat racquets, they made their way to opposite sides of the court and enjoyed a few rallies much to the delight of the spectators who cheered the ball boy on as he applied some topspin every now and then.

It’s not the first ballkid to be starstruck at this year’s French Open.

During the world number one’s first-round match against Simone Bolleli earlier this week, a ball boy was caught gazing at him as the Spaniard walked to his chair on a changeover.

Seems the King of Clay definitely has the magic touch.