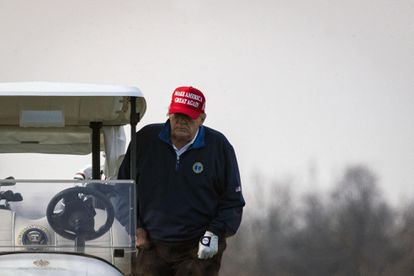 There goes the neighbourhood. Donald Trump officially left the White House on Wednesday, hot-footing it down to Florida for the foreseeable future. He’s teased a political comeback, and could well have an enormous impact on the US Election in 2024. But, should he decide to shun the limelight, we have a suggestion: He should consider a life in South Africa…

Why Donald Trump should move to South Africa:

Don’t get it twisted, Donald Trump isn’t *overly popular* in SA: A poll taken just before the recent US Election showed that roughly one in five South Africans would vote for him if they could. That approval rating isn’t much to write home about, but Trump is very much loved by large sectors of the farming community – more on that in a moment.

The 74-year-old wouldn’t just be welcomed by rural citizens, however: The third-richest man in South Africa, Patrice Motsepe, fawningly told Trump in 2020 that ‘Africa loves him’. Kevin Pietersen also implored Americans to support the outgoing president last year. So you know, that’s quite a dinner party forming already.

Remember when Big Donny T caught a glimpse of Fox News one fateful night in August 2018? He literally sat and watched The Tucker Carlson Show, where the animated host presented a very skewed take on the spate of farm attacks taking place in South Africa. Trump put down his Diet Coke, picked up his worn-out phone, and sent SA Twitter into a frenzy…

I have asked Secretary of State Mike Pompeo to closely study the South Africa land and farm seizures and expropriations and the large scale killing of farmers. South African Government is now seizing land from white farmers. @TuckerCarlson @FoxNews.”

Of course, with our Donald being such a meticulous investigator, he’s surely gagging to get over here and finish these studies – once he receives the go-ahead from Tucker Carlson, of course…

Sun City, Royal Cape Golf Club, Leopard Creek, you name it. Donald will have his pick of the courses in South Africa. During his four years as president, he spent an estimated 308 days on the links. No wonder he never found time to investigate ‘farm seizures’, with such a busy schedule.

He might know someone who’s good at building border walls

South Africa’s most notorious border, Beitbridge, has been the subject of utter derision over the past 12 months or so. The DA famously dubbed the fence at the crossing into Zimbabwe as a ‘washing line’. Earlier this month, the lax security and chaotic organisation at the post threatened to cause a ‘humanitarian crisis’.

If the ANC decide to properly erect an effective fence at Beitbridge, they should give Donald Trump a call:

Does he talk a good game about walls? Yes.

Has he got experience in building a proper border wall? Ye… no, actually. Not really.

A recent fact-checking exercise revealed that Donald Trump’s administration only built ’80 miles’ of a new fence separating Mexico from the US. He previously boasted about building ‘over 400 miles’ of his famous wall, yet it never came to fruition: Running repairs were made to existing structures, but Trump essentially failed to deliver on his contentious promise.

Still, after spending billions of dollars on 20% of a promised new wall, we’d wager that Mr. Trump at least ‘knows a guy who knows a guy’, and could help find someone to ‘Make Beitbridge Great Again’. But if he starts saying Zimbabwe will pay for it, take it with a pinch of salt – he did the same thing with Mexico, and that didn’t work out too well…

This is a low-blow, we’ll admit. Jokes about his hair and tan are so 2016. But, like a seasoned boozer who never knows when he’s had enough to drink, we’re also gonna have one for the road. Here we go:

Thanks to the cast of Saturday Night Live for providing three-quarters of that joke. May Joe Biden also develop a glowing hue, in order to keep that lot in a job…

We established earlier that Donald Trump isn’t really Mr. Popular at the moment. Fewer than 3 in 10 Americans think the 45th president did a good job in the White House – and that’s a historic low, for both The Donald and the office itself.

Donald Trump will leave office with the lowest approval rating of his entire presidency, a dismal 29%.https://t.co/aTaAdc2wB0 pic.twitter.com/f5W0CkZCSk

A majority of citizens strongly dislike the man. He’s believed to have committed ‘crimes against humanity’ while serving in government. People see him as a cartoonish villain who has previously revelled in cruelty… and that’s probably why Donald Trump could get a gig working in a Mediclinic office.

On Tuesday, it was revealed that Wouter Basson – a biological weapons expert who served the apartheid government – was working at a Western Cape facility, where he is freely allowed to practice cardiology. Nicknamed ‘Dr. Death’ for some of the atrocious crimes he’s accused of, Basson avoided prosecution due to a series of legal technicalities.

So if Trump gets over here and gives Mediclinic a resumé, the last thing he’d need to worry about is a background check.