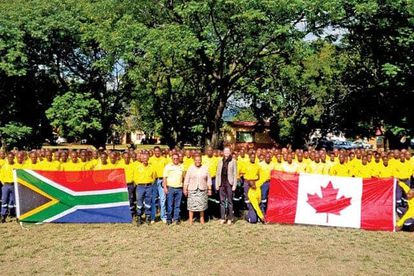 We see so many negative stories coming out of South Africa that when some good news comes along, we want to shout it from the rooftops. As South Africans living abroad, I think we particularly want ‘a good story to tell’, to borrow a phrase from the ANC.

That’s what caught our imaginations about the story of the 281 South African firefighters deployed to help battle the devastating wildfires in Alberta, Canada. This firefighting mission to Fort McMurray was the biggest ever non-military deployment of South Africans to help a foreign country.

The firefighters were from the “Working on Fire” government programme which gives young people jobs and pulls them out of poverty. In this case, it felt good to know that humble people from a developing country were able to help a first world country, when usually it’s the other way around.

And of course, the first thing the South Africans did when they touched down in Edmonton was sing. A video of the yellow-clad warriors singing and dancing in the arrivals hall of the airport went somewhat viral and brought the news to the attention of South Africans across the world.

“This is one of the most amazing things I’ve ever seen,” said a Canadian journalist who was there to cover the story. And yes, it was amazing. We often forget that what we see as normal is extraordinary anywhere else in the world. Choral singing is part of the fabric of South African life – we sing at work and at play, when we’re happy and when we’re not so happy (think protest songs). Can you see this happening in England (apart from at a football game, perhaps)? Over here, choral singing is usually done by ‘qualified people’ ie a choir.

As we listened to the firefighters’ voices raised in unison,we got goosebumps and our hearts swelled with pride. In their performance I felt their joy but also their fear of this perilous undertaking. We wished them ‘sterkte’ and prayed for their safe return. According to local media reports, a man who worked in one of the towns evacuated by the fire personally thanked each South African as they walked through the arrival gates.

But then it all turned sour. A few days into the job, the firefighters downed tools over a pay dispute and were forced to return home while attempts to resolve the matter are underway. I’m still proud of those firefighters. I don’t believe they went to Canada to make trouble and I support their right to fair pay for such dangerous work. But it’s no longer the feel-good story it promised to be.

Isn’t that so often how it goes in SA? We swing constantly between bipolar extremes of elation and disappointment. One step forward, two steps back. Two steps forward, one step back. The crazy Mzansi dance.

Other stories will come along to restore our pride, no doubt. And we’ll continue to lurch wildly between triumph and disaster. It’s the South African way.