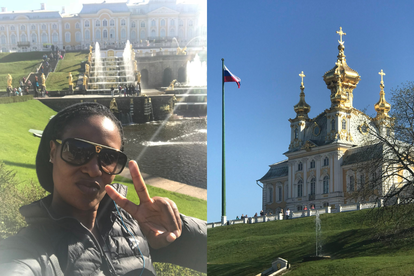 Jacob Zuma’s daughter Dudu Zuma-Sambudla has taken to social media to confirm her visit to Russia despite the ongoing conflict with Ukraine.

Posting photos of herself in front of the Peterhof Palace, Zuma-Sambudla asked the online community to ensure that Transport Minister Fikile Mbalula knew she had landed in the region.

“Someone please tell my good friend Mbakz that I have just landed in Russia. He has still blocked me.”

Interestingly, Zuma-Sambudla opted to travel to Saint Petersburg to visit the series of palaces and gardens located in what is described as the cultural capital of Russia.

Earlier, Zuma-Sambudla had ensured the world at large knew that she supported the Russian side of the conflict. In response to a report indicating that the Russian economy was benefiting from trade with China, the ex-president’s daughter commented that:

Zuma expresses his views on the matter

This trip comes just days after Jacob Zuma went public with his views on the conflict that has dominated headlines since Russia invaded its neighbour.

In a lengthy statement issued by the Jacob Zuma Foundation, the ex-president weighed in with his view on how Russian President Vladimir Putin had been ‘provoked’ by the establishment of NATO bases in the Ukraine.

Zuma also alluded to a plot underway against nations which form part of the BRICS alliance. In line with this, the ex-president claimed that his arrest formed part of this alleged plot.

“Zuma was removed from office, before he finished his term, by the western forces using their forces that they are in control of within some structures of our government, and some that they control in the ruling party. He was subsequently unlawfully arrested ( as confirmed by no less than two constitutional court justices).”