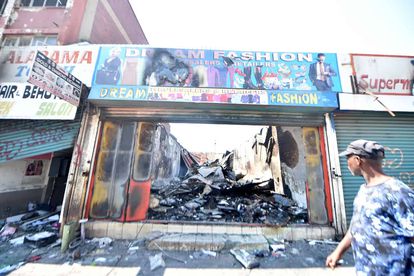 The Zambia high commission in Pretoria has cautioned its citizens living and traveling in South Africa to take extra precautionary measures for their safety in the face of widespread attacks and looting targeting mainly the businesses of foreign nationals.

“Trouble spots or towns should be avoided as well as movement to other places except where it is absolutely necessary,” the mission’s Naomi Nyawali said in a statement.

She said a Zambia national in Gemiston sustained life threatening injuries on Monday after being stabbed on the forehead by a group of unknown people.

“Daniel Lupiya, 33, was attacked on his way home after dropping his niece at one of the schools in the area. According to the information availed to the Zambia mission in Pretoria, Mr. Lupiya was brutally attacked after a group of unknown people greeted him in the local dialect but [he] could not respond,” Nyawali said.

“He was then brutally stabbed and left for dead but was rushed to Gemiston Hospital where he was attended to. His condition has been described as stable. The assailants motive for his brutal attack has not yet been fully established but it is suspected that he was attacked because of the current wave of violent attacks against foreigners in South Africa.”

Nyawali said Lupiya has been in South Africa for two months, visiting his brother.

Police on Monday said 91 people had been arrested in and around Johannesburg over the past two days over the violence.

“Police are condemning all acts of violence directed at the businesses and the looting of shops described as those of foreign nationals by criminal opportunists in areas that include Ekurhuleni, Tshwane and Johannesburg central,” Gauteng spokesman Colonel Lungelo Dlamini said.

Cause of the looting and distruction

The latest spate of violence started in Pretoria last week, when several shops were looted and burnt, leaving a trail of destruction in South Africa’s volatile capital city following the shooting of a taxi driver allegedly by a drug dealer.

The looting soon spread to Johannesburg and while people from Zambia weren’t a specific focus it did appear to be predominantly foreign-owned shops that were attacked.

“The Gauteng provincial commissioner, Lieutenant General Elias Mawela, has instructed all commanders to take strong action against the perpetrators as this state of affairs can not be allowed to continue,” he said.