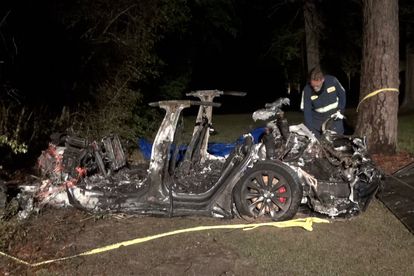 Two men from the United States died after a Tesla vehicle, which was allegedly operating without an occupant behind the steering wheel, ran off the road and crashed into a tree near Houston, Texas on Saturday night, 17 April 2021.

A local police officer, Sergeant Cinthya Umanzor from Harris County Precinct 4, told Reuters “there was no one in the driver’s seat.” The victims were aged 59 and 69 years old.

VEHICLE INVOLVED IN THE ACCIDENT WAS A 2019 TESLA MODEL S

The Texan television news outlet, KPRC 2, reported that the vehicle, which was released in 2019, was travelling at high speed when it failed to negotiate a cul-de-sac turn and veered off the road and collided with the tree.

Local police officials found that no one was in the driver’s seat and two unidentified men in the car were positioned in the front passenger seat and the back seat of the Tesla.

The authorities told KPRC 2 that they used more than 120 000 litres of water to put out the vehicle’s fire and turned to Tesla for advice on how to extinguish the blaze, as the vehicle’s battery kept reigniting.

AUTHORITIES ‘100 PERCENT CERTAIN’ THERE WAS NO DRIVER IN THE CAR

Constable Herman confirmed that two bodies were found in the Tesla once the fire was extinguished to KHOU 11.

“They are 100 percent certain that no one was in the driver seat driving that vehicle at the time of impact. They are positive,” said Herman.

Herman added that given the height of the seats of the vehicle it would be almost impossible for someone to have been in the driver’s seat of the Tesla.

“Several of our folks are reconstructionists, but they feel very confident with the positioning of the bodies after the impact that there was no one driving that vehicle.

“And again, the height from the back seat to the front seat, that would be almost impossible, but again our investigators are trained.

The latest accident comes at a time when Tesla’s semi-automated driving system is under the cosh because of recent accidents and as it prepares to avail its  updated “full self-driving” software to more customers, according to Reuters.

On 18 March 2021, the United States auto safety agency – the National Highway Traffic Safety Administration (NHTSA) – revealed that it has opened 27 investigations into Tesla vehicle crashes, of which 23 remain active, and at least three of the accidents were recent at the time.

Hours before the accident on Saturday, Tesla founder Elon Musk boasted that his vehicles are becoming increasingly safer with the autopilot function engaged when compared to normal vehicles.

“Tesla with autopilot engaged now approaching 10 times lower chance of accident than the average vehicle,” said Musk in a tweet.