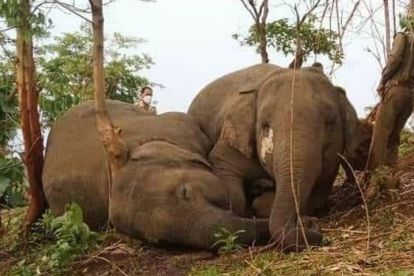 Indian forest officials said on Friday, 14 May, that they believe lightning is responsible for the death of 18 wild Asiatic elephants in the northeastern part of the country. Five calves and 13 adult elephants were found dead in the Kondali forest reserve on Thursday.

According to the Associated Press, the elephants were found during rains in the Kondali Forest reserve, which is a protected area. The forest guard reportedly found 14 animals at the top of the hill and four more at the bottom.

Preliminary reports by local veterinarians found that the elephants were killed by a lightning strike. Conservations groups, however, are dubious.

Soumyadeep Datta, a prominent conservationist and member of Nature’s Beckon – an environmental activist group – told AFP that it was unlikely that the elephants were killed by lightning based on social media images.

“Poisoning could be behind the death of the elephants,” Datta said. “We have to wait for the autopsy report, which the forest department will do soon.”

The nature reserve is in the Nagaon district of Assam State, some 150 kilometres east of Gauhati, which is the state capital.

The state is home to approximately 6000 Asiatic elephants who venture out of the forest in search of food often. There are nearly 30 000 in the country as a whole, which accounts for 60% of the continents wild Asian population.

AFP said a team of vets and forest officials headed to the site of the alleged lightning strike on Friday with Assam’s forests and environment minister, Parimal Shuklabaidya.

Conservation groups have encouraged the government to stop people from encroaching on the elephants’ territory and set up corridors for the mammals to move in freely. Both AFP and AP say that there’s been a marked increase in the number of elephants and locals killed by each other as they move into each other’s territory.