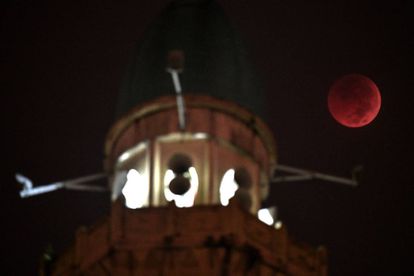 A picture shows a “blood moon” eclipse beside the dome of the Wilayah mosque in Kuala Lumpur early on July 28, 2018. The longest “blood moon” eclipse this century began on July 27, coinciding with Mars’ closest approach in 15 years to treat skygazers across the globe to a thrilling celestial spectacle.
Mohd RASFAN / AFP

A picture shows a “blood moon” eclipse beside the dome of the Wilayah mosque in Kuala Lumpur early on July 28, 2018. The longest “blood moon” eclipse this century began on July 27, coinciding with Mars’ closest approach in 15 years to treat skygazers across the globe to a thrilling celestial spectacle.
Mohd RASFAN / AFP

Strictly speaking the ‘blood moon’ will not be visible in South Africa regardless of where you are in the country.

The eclipse will begin at about 04:30 SAST but the moon will dip below the horizon before the earth’s shadow stretches across the whole of the moon. Part of the eclipsed moon may still be visible on the horizon until it completely sets.

Stargazers in Cape Town and the West coast will see the most of the eclipse but even they will not see the moon turn completely red.

The height of the eclipse will take place at 07:12 SAST but the moon will not be visible in South African skies at that time.

The next ‘blood moon’ fully visible in South Africa will be on May 26 2021 though another partial eclipse will be visible in January of 2020.

During the first phase of an eclipse the partial outer shadow of the earth, known as the penumbra, stretches over the face of the full moon, this process will begin at 04:26 SAST and will be the only part of the eclipse visible in South Africa.

Check out the live stream of the super wolf blood moon here.

The second phase of an eclipse sees the earth’s fuller and darker shadow, the umbra, stretch across the face of the moon causing it to appear red and giving it the name ‘blood moon’. This phase starts at around 07:12 SAST but takes place after sunrise and is not visible in South Africa. South Africans will need to content themselves with live streams of the remainder of the astronomical event.

Total Lunar eclipses are a freak cosmic event that we can enjoy because of the current distance of the moon from the earth, but the moon is inching away from the earth, at the glacial pace of 4cms per year, and in a few billion years (roughly four times the length of the month of January) the earth’s shadow will no longer completely cover the moon’s surface.

Blood Moon lunar eclipse: Everything you need to know

The reason the moon doesn’t fall into total darkness is that some light reflects off the earth and onto the surface of the moon. This light is refracted through the earth’s atmosphere giving the moon an eerie glow.
If one were standing on the moon, looking back at the sun, one would see the black disk of Earth blocking the entire sun, but also a ring of reflected light glowing around the edges of Earth.