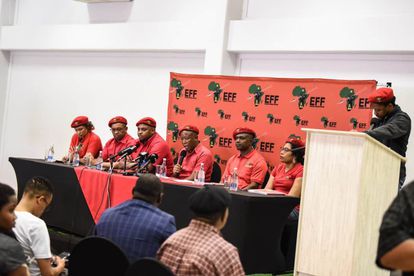 It’s fair to say the EFF didn’t appreciate the way Julius Malema’s no-show at the East London Magistrate’s Court was reported by the South African press on Monday. The party have released a statement condemning the media coverage, and dispute how the term “arrest warrant” has been used in headlines.

Malema was initially scheduled to attend proceedings relating to an incident at an EFF rally in 2018. He was accused of firing a rifle in the air – with a round of live ammunition – and racked-up five criminal charges in the process. However, the hearing was postponed when Juju didn’t pitch, and an arrest warrant was issued.

However, here’s the bone of contention: It doesn’t come into effect until 8 May. It’s an eerily similar circumstance to what former President Jacob Zuma found himself in earlier this year: When he dodged his corruption trial on medical grounds, the Pietermaritzburg High Court also actioned a ‘delayed arrest warrant’, which comes into play on 6 May. Conceivably, both politicians could be arrested in the same week.

Why Julius Malema wasn’t in court on Wednesday

That’s the long and short of things. But of course, the EFF want to say their piece:

“In a previous appearance, Julius Malema was excused from attending the East London High Court until the actual trial starts. It is law that when an accused doesn’t appear in court, the warrant of arrest is held over. This means the accused cannot be detained unless they don;t show up for the date of their trial.”

“The warrant is standard procedure, and it is no concern for the CIC. It is not representative of guilt. Malema will appear before the court as he has done before dilligently when required to do so.”

Julius Malema – did he get a fair deal?

The media – hardly in the EFF’s good books these days – were also branded “sensationalist” and “opportunistic”. At the end of the day, an arrest warrant that is held over is still an arrest warrant.

It’s also worth noting that when a judge puts this order in place against a major political figure, as was the case with Jacob Zuma, it has to be reported for the sake of public interest. Nonetheless, the pending case against Julius Malema promises to be a fascinating one.